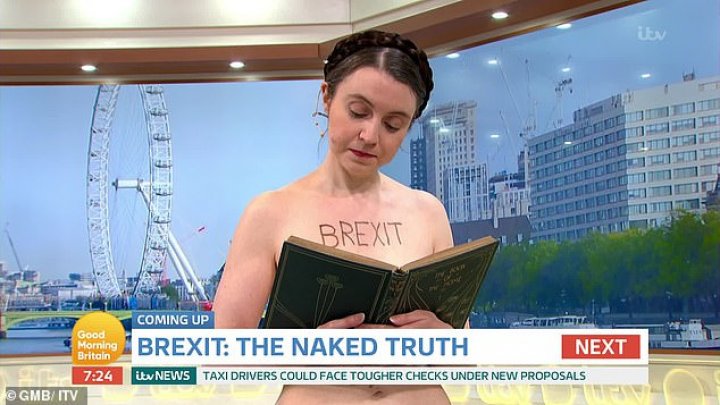 Cambridge academic Dr Victoria Bateman was nude on the set this morning with an anti-Brexit message written across her breasts.

The show had to blur her slogan that Brexit leaves Britain naked but she insisted that she was using visual power to make an important statement.

'As an economist I'm used to using words and equations in order to make an argument,' she told the show.

'I thought what I would do i condense down those thousands of words in one simple message that Brexit leaves Britain naked.'

She said that leading Leave campaigners would be unable to deliver the promises made to those who voted to exit the bloc and that Brexit was irrelevant to the daily struggle Britons face up and down the country in the form of foodbank use and poverty.

It comes just three days after she surprised Radio 4's John Humphrys when she disrobed and then challenged Tory Brexiteer Jacob Rees-Mogg to a nude debate.

Humphrys, who said, startled, 'oh, I see you're naked', told listeners that Dr Bateman had the words 'Brexit Leaves Britain Naked' painted across her body.

It is not known whether the BBC was aware that Dr Bateman had intended to strip during the interview which saw her arrive wearing a coat and then disrobe in front of an unsuspecting Humphrys.

Today she told presenter Richard Madeley that she had done 'nothing illegal' by disrobing in the radio studio.

Richard - standing in for Piers Morgan this week - told her that he didn't think her display was particularly shocking but Penny Smith disagreed.

Dr Bateman said that naked people are on display 'all the time', from 'scantily clad' models to the 'whole world of pornography'.

She insisted that the only thing that was shocking about her protest is that she's a naked woman with a voice after years of a society controlled by men.

But it isn't just Brexit that sparks naked protest from Dr Bateman, who stripped off in a gender equality protest last year.

At a talk entitled Feminism Meets Economics, she covered her breasts and genitals with only a handful of £5 and £20 notes.

Five years ago she posed nude for a portrait shown at the Royal Society of Portrait Painters exhibition at the Mall Galleries.