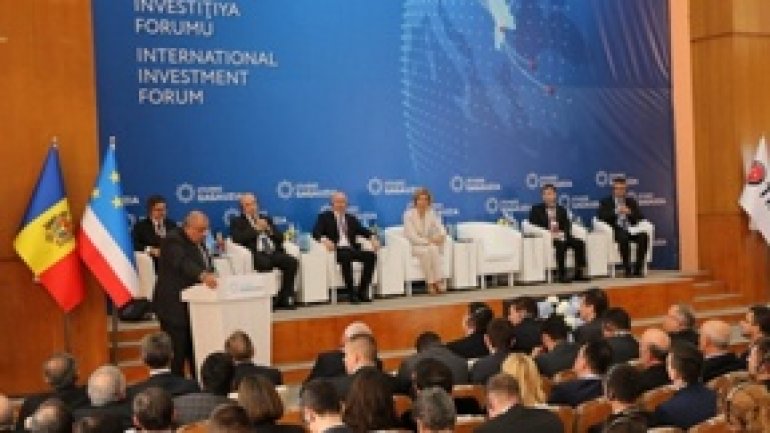 More than 250 business people participated in the second Invest Gagauzia forum in Comrat this past weekend, Infotag informs.

Not only officials from the highest leadership of Moldova and Turkey were invited to attend the forum, but also national companies and business associations, representatives of enterprises from 20 countries.

Opening the forum, Gagauzia Bashkan [governor] Irina Vlah said that it was conducted under the slogan “360°”, as the Republic of Moldova has preferential regime of trade with CIS countries and the European Union, while since November 1, 2016 – with Turkey.

“Gagauzia has its own legislation, which allows considerably stimulate investors – tax exemptions, providing of grants and other assistance. If we create in Gagauzia a joint production, investors will have null customs duties at exporting goods from Moldova to Turkey, Russia, CIS and the EU”, the autonomy’s governor said.

She reminded that the autonomy’s population accounts for 160 thousand people, who have quality education and know several languages.

Moldovan Prime Minister Pavel Filip said that a week earlier, a business-week has been conducted in Chisinau, which included many actions on attracting investors.

“We regard the Gagauzia forum as a good example for other regions of Moldova and a logic continuation of Chisinau’s path towards making the country attractive on the Eastern Europe’s map. Over the last time, the center managed to renounce the previous practice, when the state had a role of supervisor over the business. In such a model of building relations, only companies, administrated by governmental officials, managed to succeed. We want to get rid of this practice to give freedom to the business and attract investors”, he said.

Turkish Deputy Premier Yildirim Turkes said that cooperation and friendship is possible between Moldova and Turkey.

“There is no place for political competition, because Gagauzia is a connecting bridge, strengthening the cooperation between our countries. In 2015, the trade turnover between Turkey and Moldova accounted for US$211 million. Turkey is the 6th in Moldova on exports and the 8th on imports. Starting from November 1 – the date of entrance into force of the free trade agreement – the trade turnover will considerably grow. Turkish companies in Moldova provide working places to 8 thousand Moldovan citizens. For example, the textile factory “Asena-textile” in Gagauzia. I want that the number of such investment projects to grow”, Turkes said.

Ambassador Extraordinary and Plenipotentiary of Russia to Moldova Farit Muhametshin said that the current forum is cardinally different from the last year’s forum both in terms of participants and the high level of Moldovan leadership presence.

“There is also a big delegation from Saint Petersburg, headed by the city Deputy Governor Sergey Movchan. For already many years, working and developing contacts, Saint Petersburg business community is ready to invest in and to study projects Gagauzia is proposing. Also, a numerous delegation from Tatarstan, headed by its Deputy Minister of Industry and Trade”, the Ambassador said.

He pointed at the fact that last-year agreements of intent are currently being implemented.

“There are interesting projects not only of humanitarian character, but also in the field of agriculture and industry”, Farit Muhametshin said.