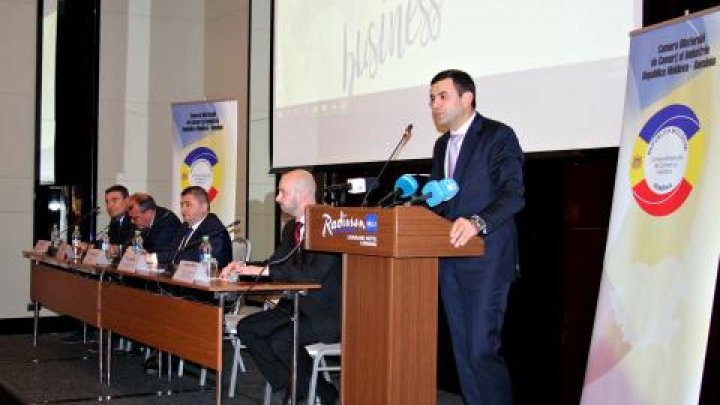 The Minister of Economy and Infrastructure, Chiril Gaburici, participated today, together with his counterpart in Romania, Danuţ Andruşca, at the Excellence in Business Forum. The event is at its second edition and aims to promote investment in Moldova, as well as actively involve business in developing mutually beneficial collaboration between both countries.

The Excellence in Business Forum is proof of intense collaboration and work between the Moldovan and Romanian Governments, especially on the economic dimension. In the Republic of Moldova there are 1678 companies with Romanian capital worth about 1.2 billion lei. Thus, Romania ranks third in the volume of investments in our country.

"It is very important that the economic agents in Romania can find themselves in the free economic zones, industrial parks and IT parks. I encourage the Romanian companies to participate in the privatization process that takes place in the Republic of Moldova. important for the Government of the Republic of Moldova, very important for the country - the Iasi-Ungheni-Chisinau gas pipeline ", pointed out Chiril Gaburici at the opening of the Forum. Also, the Minister announced that in the autumn of this year, the 11th session of the Moldovan-Romanian intergovernmental commission for economic cooperation will take place.

In turn, the Minister of Economy of Romania reiterated the interest and the availability of the Romanian companies, as well as of the foreign ones, which are active on the territory of Romania, to invest in the Republic of Moldova.

Subsequently, the two ministers and representatives of Transgaz Romania had a meeting, during which they discussed the progress made in the construction of the Ungheni-Chisinau gas pipeline, the following steps and the terms of its implementation.

"I am glad to see the progress of the Ungheni-Chisinau gas pipeline project. At the end of the summer we will be on the site and we will work," said Economy and Infrastructure Minister Chiril Gaburici.