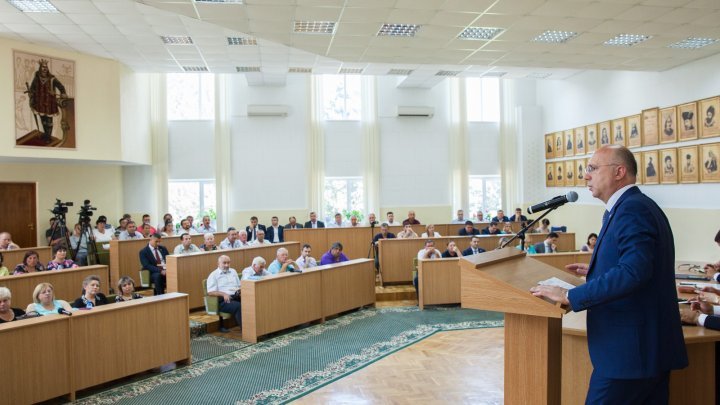 Prime Minister confirmed the opening of the Government for constructive dialogue with the economic agents to find solutions for problems they face.

During the dialogue, measures of Government to improve business environment were reviewed: the reform of permissive acts, the reduction of the number of institutions with control functions, the simplification of reporting procedures and obtaining work permits, and the modernization of the Labor Code .

As a result of these actions, economic growth of 4.5% was achieved in 2017 and the average salary in the economy increased this year to 6000 lei. At the same time, the Free Economic Zones invested $ 115 million and the number of employees increased by 65 percent. In total, around 60,000 jobs were created last year.

However, there are still many reservations and the Government wants to have a credible and efficient partner in the business environment, says the prime minister.

Entrepreneurs have appreciated the measures taken by the Government, but have also referred to the problems that prevent them from developing their businesses: illicit transportation of passengers, high costs for irrigation of agricultural land, delays in court trials, and some cases of pressure from tax inspectors.

At the same time, entrepreneurs came with their own visions to facilitate their work: to amend the Fiscal Code by introducing a single value added tax and to approve modifications that would allow the development of recreational areas related to aquatic basins.

Prime Minister said that business suggestions will be thoroughly evaluated within relevant ministries, including the Economic Council platform besides the Prime Minister and will be taken into account in policy making for business development.