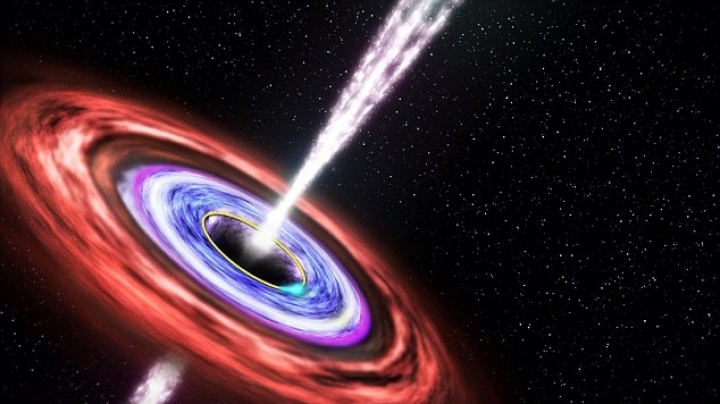 Releasing more energy in one second than the sun will in its entire ten-billion-year-lifetime, gamma ray bursts are some of the universe’s most powerful phenomena.

The energy is released in a focused jet of electromagnetic waves, meaning they can travel billions of light years and still look bright to us on Earth.

While all the bursts we see come from distant galaxies, there is a slight chance the same thing could happen much closer to home – and if it does, life on Earth will be wiped out without warning.

Our planet’s magnetic field and ozone protect us from most of the dangerous space radiation, but if we were zapped with anything much more energetic, or from something closer, we would not be likely to survive.

Gamma ray bursts (GRBs), energetic jets of gamma rays that come from black holes, can be created in two different ways – resulting in long or short GRBs. They are created from some of the most violent deaths in the universe.

‘Long GRBs last about a minute, and scientist think they are produced by supernova: when the core of a massive star collapses to become a black hole,’ the video says.

‘Short GRBs last a second, and are produced when two neutron stars in a binary merge.’
Over millions of years, their orbits decay by emmiting gravitational waves. Once they are close enough to touch, they crash and splash into each other, forming a black hole.

Gamma rays are a much more energetic form of light than the light we can see. A single gamma ray photon is more energetic than 1 million visible light photons combined, and is capable of disrupting our DNA.

A gamma ray burst is the equivalent of taking all the stars within a hundred million light years and focussing it into one kind of energetic 'laser beam'.

Because gamma rays travel at the speed of light, we would have no warning of the attack until it hit us. By that point it would be too late, and most complex life on Earth would be dead, DailyMail reports.