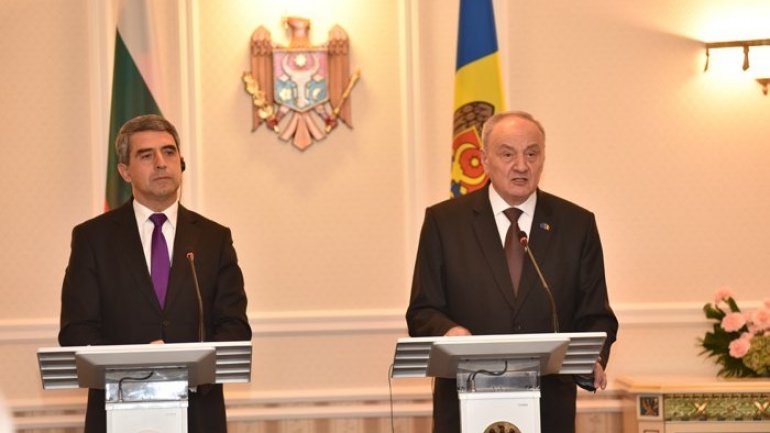 Bulgaria will keep on supporting Moldova in its European integration process. This statement was made today in Chisinau by Bulgarian President Rossen Plevneliev after the meeting with his Moldovan counterpart Nicolae Timofti, according to Moldpres.

The president of Bulgaria specified the good relations of cooperation between Moldova and Bulgaria. "We will continue to support Moldova's European integration, contributing to the Transnistrian conflict settlement, preservation of territorial integrity, peacekeeping, economic development, democracy and prosperity, in particular through the implementation of reforms," said Rosen Plevneliev.

Moldovan President Nicolae Timofti said that relations between Moldovan and Bulgarian peoples were not merely constructive, but also marked by friendly feelings and set for decades. "We discussed the main objectives of the bilateral agenda for cooperation intensification. We have talked about the situation in the region, and about presidential elections held in both countries. In this context, we want to send a new head of state relay of friendship between the two countries to continue the close dialoguing in economic, agriculture, health, transport and education spheres," said Timofti.

During the meeting, the President of Moldova Nicolae Timofti awarded the President of Bulgaria Rosen Plevneliev the Order of the Republic, which he was decorated with a month ago. At the same time, his Bulgarian counterpart offered President Timofti the Order Stara Planina for maintaining good relations of cooperation between Moldova and Bulgaria.