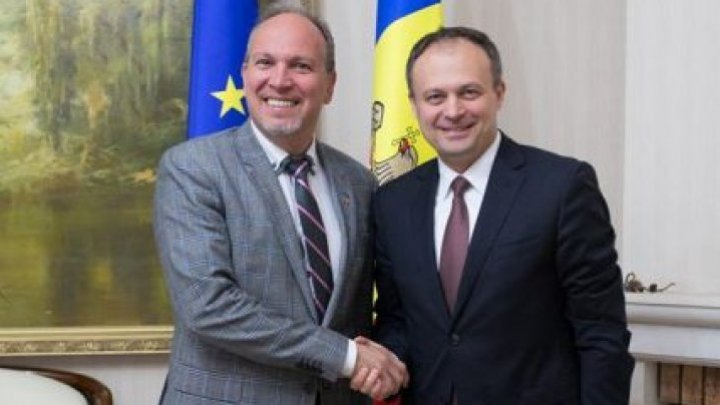 Andrian Candu, Parliament Speaker, had a meeting with the Romanian Ambassador to Moldova Daniel Ioniţă. During the meeting, officials noted the strong dynamics of the bilateral dialogue, confirmed by over 20 bilateral visits over the last 3 months.

The Parliament Speaker reiterated the interest in urging to final Moldova's interconnection projects to the European energy market.

Andrian Candu stressed that, the Parliament will debate the draft law for ratification of the Financing Agreement between the Republic of Moldova and the European Investment Bank on Moldova - Romania Electric Interconnection.

Previously, Parliament declared the Ungheni-Chisinau gas pipeline as a public utility of national interest and voted a series of legislative acts in this respect.

The discussions also focused on the level of implementation of important projects with a social impact, financed by the Romanian Government under the Moldova Development Assistance Program.

Similarly, Andrian Candu appreciated the Parliament's partnership with the Romanian Ministry of Foreign Affairs and the Embassy of Romania in Moldova which result in summer camps in Romania of young Moldovans every year.

Between 14-21 August 2018, 38 young people, the most active participants of the EU are EUropa photo competition, organized by Parliament, will benefit from a sea holiday in Romania under the ARC Campaign Program from Sulina.

Officials also addressed the issue of expanding and diversifying trade and economic cooperation, reiterating the importance of holding the XI Session of the Joint Intergovernmental Commission for Economic Cooperation in Chisinau in the autumn.