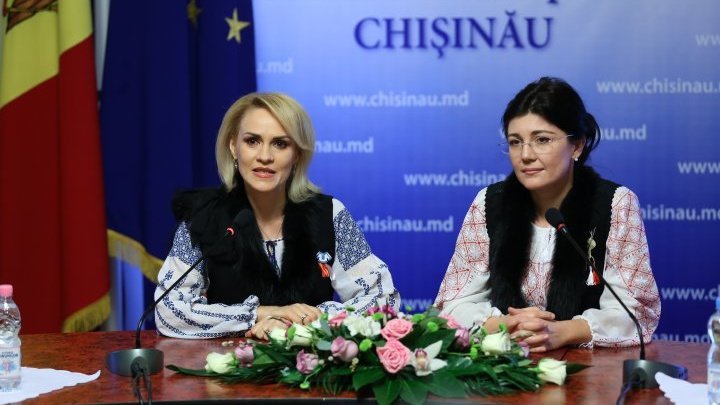 The meeting between Mayor of Bucharest, Gabriela Firea and interim Mayor of Chisinau, Silvia Radu took place under friendly notes. Both officials came dressed din traditional clothes that they have gifted each other during their last meeting in Romania.

"I came here as a sister. We all came here as your brothers and not only friends or neighbors. As brothers, we must not only love, but also support each other" mayor of Bucharest Gabriela Firea said.

"I wish to thank you for the relation we established, for the friendship we were offered and I wish you success for many years to come" interim Mayor of the Capital, Silvia Radu said.

Firea and Radu have established a program of collaboration between the two City Halls.

"We spoke in details on how municipal enterprises can be managed to save money and reallocate them in other projects for the citizens. We also spoke of the parking system Bucharest has, as well as the taxi system."

At the end of the press conference, the two Mayors exchanged gifts.

"A ceramic plate with Eminescu, because you will repair the lyceum."

Silvia Radu received an icon with the Virgin Mary, made by a priestess.

"I wished to gift you something symbolic. A mărţişor from us" Gabriela Firea said.

Three weeks ago, Silvia Radu and Gabriela Firea signed a program of cooperation between the two cities. Chisinau City Hall will launch a common route visiting all cultural and touristic sights, while Bucharest City Gall will donate two buses. Our doctors will also be able to attend training courses in hospitals from Bucharest, while pupils from Moldova will have the chance to spend their vacations in camps from Bucharest.