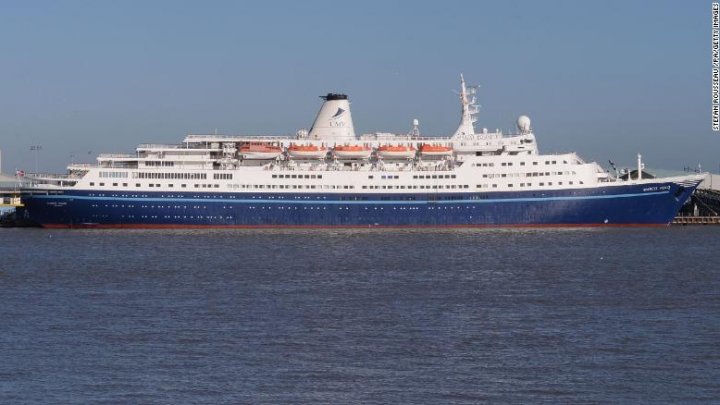 Two British senior citizens were removed from a Caribbean cruise ship and arrested after a "large amount of cocaine" was discovered in their cabin, informs cnn.com.

The 70- and 72-year-old suspects are being held by police in Portugal, the UK's Press Association news agency reported.
The Marco Polo ship, operated by Cruise and Maritime Voyages, had returned to Europe from a cruise around the Caribbean.
The septuagenarians, who are thought to be a couple, were detained in Lisbon after Portugal's Policia Judiciaria received information from the UK's National Crime Agency.
A Foreign and Commonwealth Office spokesperson told CNN that: "Our staff are in contact with the Portuguese authorities following the arrest of a British man and woman in Lisbon."
According to the Portuguese force, the pair were arrested on suspicion of trafficking narcotics and have been remanded in custody.
"In the cabin that was occupied by the suspects, four suitcases (were found) in whose structures was concealed a high amount of product, more specifically cocaine," the Policia Judiciaria said in a statement.
Officers boarded the ship when it docked in Lisbon on December 5 and searched the cabin. There they discovered 20 to 22 pounds (9 to 10 kilograms) of the Class A drug stashed away in four pieces of luggage, the Press Association reported.
The Marco Polo left Tilbury in Essex, England, on November 5 and traveled to the West Indies and Azores with 610 passengers and 294 crew on board. Once the couple were arrested, it continued back to Britain where it docked on December 8.
The suspects appeared in court in Portugal, where they were remanded in custody pending an ongoing investigation by forces in both Britain and Portugal, the Press Association reported.
A spokesman for the cruise line said that it is "cooperating fully with the Portuguese police officials" and "does not tolerate any criminal activity or antisocial behavior on board its ships."
The Marco Polo previously made headlines in 2014 after an 85-year-old British passenger was killed when a massive wave struck the ship during a severe storm.
AFLĂ imediat Știrile Publika.MD. Intră pe Telegram