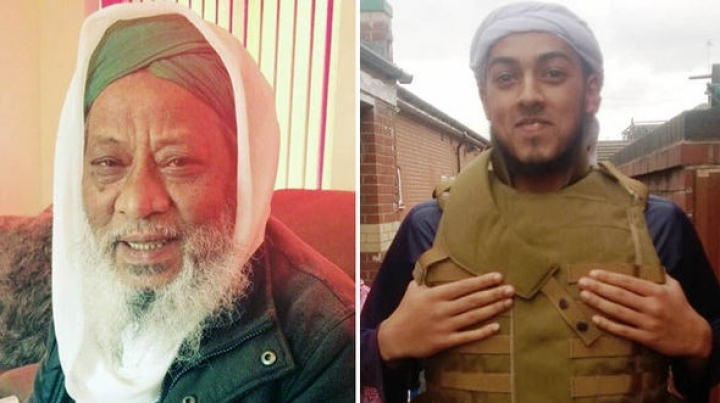 A British ISIS supporter has been jailed for life for stalking and murdering an imam who had his head caved in with a hammer, reports Daily Mail.

Mohammed Syeedy, 21, was consumed by hatred of Jalal Uddin, 71, because he practised a form of Islamic healing in Rochdale's Bangladeshi community which the terror group consider 'black magic'.

Former Manchester United steward Syeedy acted as getaway driver for another man, Mohammed Kadir, 24, who bludgeoned Mr Uddin to death in a children's play area on the early evening of February 18.

Syeedy was today handed a life sentence and ordered to serve a minimum of 24 years.

Kadir fled the UK three days after the killing and it is thought he may now be in Syria.

The pair developed a hatred of Mr Uddin because he used a form of healing involving amulets, known as taweez, which are said to bring good fortune.

They stalked Mr Uddin for six months and called him 'Voldemort',the evil wizard in Harry Potter, because they saw his faith healing as 'black magic', the trial heard.

Their intention turned to murder after they saw a photograph of the former imam – who they regarded as a 'magician' - with Rochdale MP Simon Danczuk at the end of last year.

Mr Uddin, who was 71 at the time of his death, was bludgeoned in a park in Rochdale, Greater Manchester, in a horrific attack with a hammer because they believed that he was practicing 'black magic' and needed to be 'punished'.

The jury of six men and six women today found the defendant guilty of murder after four hours of deliberations.

Syeedy held his hands to his face in shock after the foreman delivered the verdict after about four hours of jury deliberations.

He later shook his head several times with his face covered as he sat down.

As part of his defence, Syeedy claimed that he had been personally affected by the acts of ISIS, after the death of taxi driver Alan Henning who was his older brother's good friend, branding them as 'disgusting' in his evidence.

He also travelled as part of an aid convoy, Rochdale to Syria, in 2013, where the defence suppose that he was radicalised.

The pair were said to have sympathised with the ISIS ideology that Taweez are 'black magic' and the magicians practicing it should be killed.

They and their associates carried out secret surveillance to establish where Mr Uddin was living and in August 2015 raided the mosque where he kept his books of 'spells' and other precious religious materials.

Mr Uddin suffered severe head injuries, with his dentures being broken in half inside his mouth and having the imprint of a hammer head on his forehead.

Syeedy, who pleaded not guilty to both murder and manslaughter, denies the fact that he is an ISIS supporter, despite extremist material being found on his mobile phone.

Among these were photographs of Syeedy and his associates raising index figure salutes, which are said to signify an allegiance to ISIS, it is claimed.

Kadir travelled to Instanbul after the killing and is believed to had fled to Syria three days after killing Mr Uddin.

He has a history of posting ISIS-related material online. In February 2015, he updated his profile picture on a social network with an image containing a quote about armies carrying black flags.

He also posted a photograph of a lounge with a television in the background showing an image of an ISIS flag.

He also posted an English-language nasheed produced by ISIS with the chorus: "We are the soldiers that fight in the day and the night."