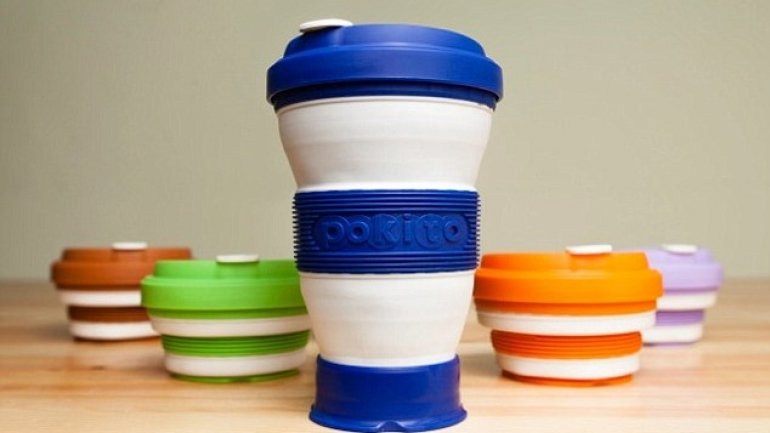 If you've ever felt guilty about throwing away your empty coffee cup on your morning commute, then this could be just the thing.

A British entrepreneur has invented a reusable plastic cup that collapses to fit perfectly in your pocket, reports Daily Mail.

The inventor, Andrew Brooks, hopes that the Pokito will replace the disposable cups given away by Costa, Starbucks, Caffe Nero and Pret a Manger.

The problem with the high street cups is that they are coated in a plastic membrane, which means they cannot be recycled along with other paper waste.

As a result, some 2.5 billion are dumped every year, ending up in landfill where they take up to 30 years to rot down, while releasing greenhouse gases.

Green campaigners have urged retailers to change the design to make them easily recyclable. However, an even better option would be a shift to reusable cups.

Environmental economist, Chris Sherrington, of waste experts Eunomia, said: ‘Increasing single-use cup recycling rates is of course a positive step, but the focus on this deflects from the real solution to this problem. We should be incentivising consumers enjoying coffees “on the go” to take reusable cups.’

The Pokito adjusts to three sizes (grande, medio and espresso) and scrunches up small enough to fit in a pocket, bag or briefcase.

It is tested to last for 1,500-plus uses and is also dishwasher-proof.

Mr Brooks came up with the idea while fishing off the west coast of Canada in the summer of 2012.

He saw huge pine forests, planted and felled simply to produce disposable paper cups and began to wonder if there was a better way.

Current travel mugs do offer an alternative but they are bulky by nature and often end up at the back of a cupboard after a few uses.

The Pokito has a centre band designed for strength and insulation. It collapses down to 4.5 cm, making it easy to carry or stack in a cupboard.

The cup has patent-pending features such as built-in insulation and a clip-down, spill-proof lid, which means no leaks.

Mr Brooks said: ‘Growing millions of trees to manufacture billions of cups for a few minutes of convenience has to be considered a wasteful and ecologically unsound practice. I do believe there has to be a better way.

‘We can still enjoy our daily indulgence and manage to safeguard the environment for future generations.’

Mr Brooks is using the Kickstarter crowdfunding website to raise £12,000 to produce the Pokito, which will sell for £15.