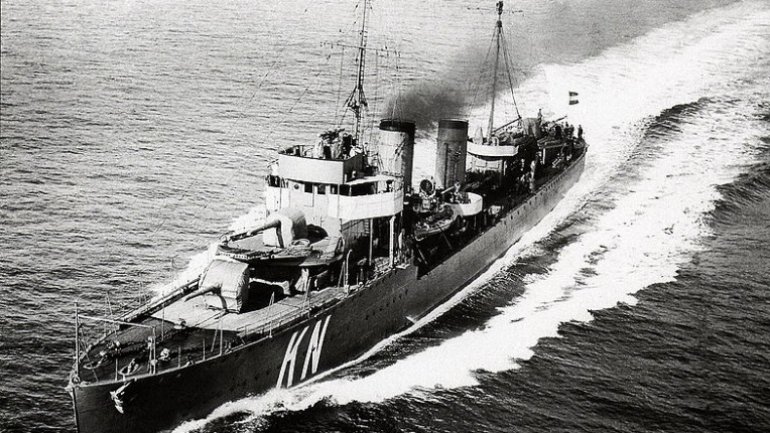 Several World War II shipwrecks have vanished from the bottom of the Pacific Ocean, prompting the British and Dutch governments to seek answers, reports CNN.

Divers first found the WWII wrecks - which were declared war graves - off the coast of Indonesia in 2002.

According to the Guardian, the Dutch Ministry of Defense confirmed that the wrecks of cruisers HNLMS De Ruyter (6,545 tons) and HMLMS Java (6,670 tons) and destroyer HMLMS Kortenaer (1,316 tons) were found missing during a expedition to mark the 75th anniversary of the Battle of Java in 2017.

Though divers used underwater photography and sonar to find traces of where the ships had been, both cruisers and vast parts of the destroyer had disappeared from the bottom of the Java Sea.

The Guardian also reported that two British ships, the heavy 8,390-ton cruiser HMS Exeter and the 1,405-ton destroyer HMS Encounter, and one US Navy submarine had also gone missing. HMS Electra, a 1,405-ton British destroyer, has also been scavenged though a chunk of that wreck still remains.

"The [Dutch] MOD very much deplores the fact the ships are gone. After all, we have to treat this matter with care, we are talking about a very important war grave," a Dutch MOD spokesman told CNN.

The Battle of the Java Sea - which marked the height of Japanese naval power in the Pacific - involved British, Dutch, US and Australian ships and took place on February 27, 1942. It proved disastrous for allied forces who suffered the loss of at least 10 ships and 2,173 sailors.

In 2015, the New Straits Times reported that groups of divers disguised as fishermen were illegally stripping sunken WWII ships for metals such as aluminum, brass and steel.

Alongside the Dutch war wrecks, scavengers have been stripping two sunken British Royal Naval vessels, the HMS Prince of Wales and the HMS Repulse since 2012, according to British newspaper The Telegraph.

The ships' propellers are made of phosphor bronze, which according to the Telegraph report is worth around $4,700 per ton. Each ship propeller weighs in at an estimated 15 tons.

"The UK government condemns the unauthorized disturbance of any wreck containing human remains," a spokesperson from the British Ministry of Defense, told CNN in a statement.

"We have contacted the Indonesian authorities to express our serious concern at this news and to request that they investigate the reports and take appropriate action to protect the sites from any further disturbance."

It is against international law to desecrate naval war wrecks, war graves and associated artifacts as it causes distress to loved ones of those who lost their lives on board.

The British Ministry of Defense added that it would continue to work with regional governments and partners to prevent inappropriate and unauthorized activity on the wrecks of Royal Navy vessels.

"A military wreck should remain undisturbed and those who lost their lives on board should be allowed to rest in peace," the British MOD added.
AFLĂ imediat Știrile Publika.MD. Intră pe Telegram