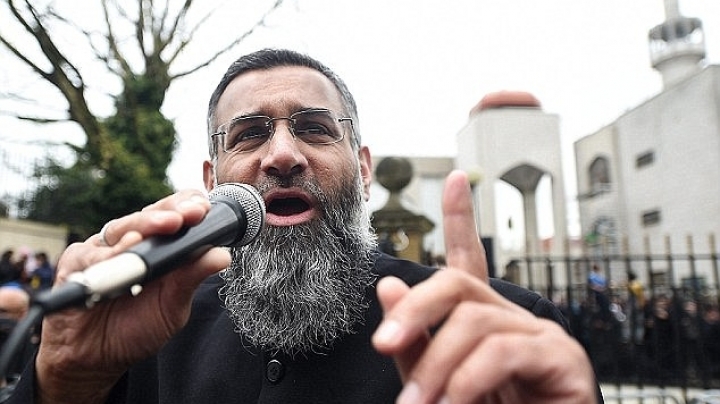 Britain's most notorious hate preacher was in jail last night after two decades of taunting authorities and peddling extremism on the streets of Britain, reports Daily Mail.

For years, Anjem Choudary has been the smug public face of radical Islam, organising street protests against British troops and espousing his poisonous views in TV interviews.

He is believed to have inspired at least 110 Britons into committing terrorist acts.

Police also think he helped encourage up to 850 fanatics to travel to Syria to fight for ISIS.

His now-banned radical group has links to 15 terror plots, including the murder of Lee Rigby and the 7/7 attacks.

The father-of-five and his family also milked hundreds of thousands of pounds from the benefits system.

But he was finally snared by police for inciting support for ISIS in a series of online lectures.

Choudary has repeatedly provoked the British public with a series of stunts in which his followers burned remembrance poppies and disrupted Armistice Day events.

He also called for Buckingham Palace to be turned into a mosque and paraded a picture of his vision which was made by a man now fighting for ISIS.

His group, Al-Muhajiroun, became a breeding ground for terrorists, most notably Michael Adebolajo, the radical convert who hacked to death soldier Lee Rigby in 2013.

After a trial which has been shrouded in secrecy, Choudary and his deputy, Mizanur Rahman, were found guilty of 'inviting support for a proscribed organisation' under the Terrorism Act 2000.

He now faces up to 10 years in prison, although judge Mr Justice Holroyde admitted there is little precedent for sentencing him.

Following the lifting of court orders banning reporting of the case, their convictions can be revealed for the first time today.

Choudary's conviction comes after a two-year, multi-million pound investigation by Scotland Yard designed to bring to an end his two decades of extremist preaching.

Choudary and Rahman will be sentenced on September 6.  The authorities fear he will radicalise a new following behind bars.

Speaking after the verdicts, Commander Dean Haydon, head of SO15, Scotland Yard's Counter-terrorism Command, said Choudary and his followers had been a 'dangerous force for radicalisation and recruitment' both of extremists and terrorists in Britain.

Nick Lowles, chief executive of the anti-racism group Hope Not Hate, said Choudary had influenced over 100 Britons who have carried out, or attempted to carry out, terrorist attacks at home and abroad.