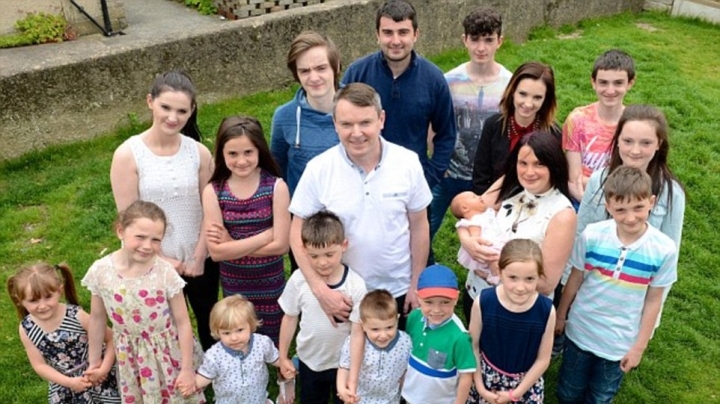 Parents of newborn babies often worry about how they are going to cope with their new arrival.

But for Noel and Sue Radford, the experience has become second nature because the 41-year-old mother, from Morecambe, Lancashire, has just given birth to her 19th child.

According to Daily Mail, the couple, whose children’s ages range from a few weeks old to 27, are the parents of Britain’s biggest family, and brought home their newest member this week - Phoebe-Willow.

Mrs Radford told: "Our friends and family keep saying I should have one more child to get an even number, rounding the family off at 20. I can’t rule it out."

The couple, who rose to fame on Channel 4 documentary series 16 Kids And Counting, run a successful family-owned bakery and pie business and do not claim benefits.

Though Mr and Mrs Radford consider themselves the parents of 19 children, the couple sadly lost their son, Alfie, in July 2014, 23 weeks into the pregnancy. They gave Hallie, who was born last summer, the middle name 'Alphia' as a tribute to her brother.

After falling pregnant with their first child when Sue was just 14-years-old, the couple decided to keep the baby as they were both given up for adoption at birth.

The family now live in a large £240,000 Victorian house, a former care home, that they bought 11 years ago and they pride themselves on having no credit cards or finance agreements. They also enjoy a holiday abroad every year.

Mr Radford leaves for work at around 5am every morning, where he works an 11-hour shift at the bakery with help from their eldest children.

Mrs Radford, who takes care of the family at home, has to make her way through nine loads of washing a day to keep her family in clean clothes.

The family spend £300 a week on food shopping, with 18 pints of milk, three litres of juice and three boxes of cereal being consumed every day.

When it comes to celebrating their children's birthdays they have a budget of £100 for presents, while at Christmas they set aside between £100 to £250.