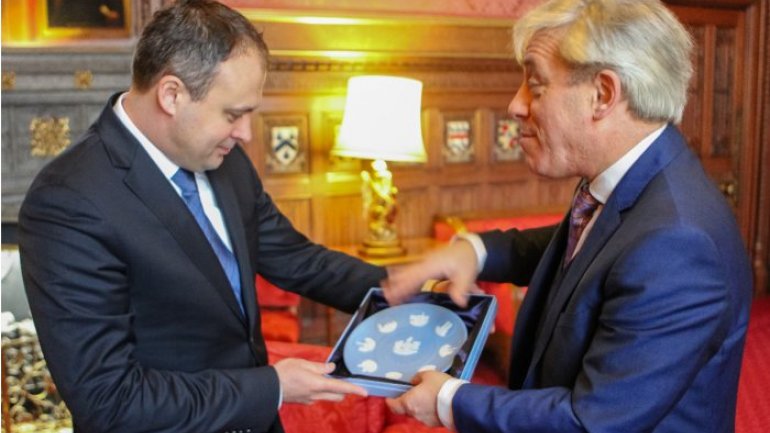 Moldovan speaker Andrian Candu has had a meeting with his British counterpart Rt Hon John Bercow, shortly before voting for the disentanglement from the E.U. has taken place in the U.K. Parliament.

The Parliament Speaker has posted a brief summary on his visit:

"In London I had a busy agenda which brought me the satisfaction of a job well done. I talked to the Speaker of the House of Commons, Rt Hon. John Bercow, just prior to initiation of the vote out of the United Kingdom of Great Britain and Northern Ireland in the European Union. Surprisingly, however, not only we talked about Brexit, but we talked about our cooperation after UK's leaving of the EU.

We were praised for progress in the democratic development of Moldova and the reform agenda that we have assumed for 2016. My invitation to visit Chisinau was happily accepted by Rt Hon John Bercow. I can't get over the detail that I hope will impress you as much as me. The current president of the House of Commons comes from a family that emigrated from Romania to the UK early in the twentieth century!

We talked about business reforms and investment projects from the EBRD. The meeting was extremely useful and I believe that the upcoming visit to Chisinau of my interlocutors, including the EBRD First Vice President Philip Bennett, will start a more intense collaboration with effects felt by residents of Moldova" , wrote Andrian Candu.

The Parliament Speaker also stressed the fact that he has was not begging for money, he requested support, trust and exchange of experience.

"I had other useful meetings for the country at the Foreign Ministry, the House of Commons, etc. We talked about our achievements. As a result we have obtained the investment support that will generate new jobs and new businesses in Moldova and the Transnistrian region problem solving, information security and energy, infrastructure and bureaucracy hampering the development of the state. It was a good visit which gathered results that will be seen in time. I was not begging money. I requested and obtained support, trust and experience exchange.

I had a visit that I set with the Royal House of Romania. Together with Prince Radu of Romania we discussed how the projects of the Royal House of United Kingdom can be extended to Moldova. Over lunch at Buckingham Palace, I discovered really extraordinary people that are surprisingly open to Moldova. I sent a set of bottles of collection Purcari wines which in the past has allegedly been one of the suppliers to the Royal Household of the United Kingdom. I also invited them in Moldova. They said they would be pleased to, but initially we have to develop projects. I'm sure that among them are many who will use this offer and promote selfless causes that would bring more good community and would be able to interest the royal family in Britain" , informs the Parliament Speaker.

Together with the Prince Radu of Romania, they have visited the Invictus Games Foundation, and shared the joint efforts to highlight the heroes of Moldova.

"Together with Prince Radu of Romania, we visited the Invictus Games Foundation. I know that in Moldova there are many heroes, people on duty, who have been selflessly serving the homeland, and suffered. Many of them are still struggling already from the position of people with special abilities. I think it is worth fighting and we like to bring them among invincibility. I spoke to President of the Invinctul Games Foundation, Sir Keith Mills. Then I talked to Prince Radu of Romania about the joint efforts to highlight the heroes of Moldova.

I visited the University of Kent, where several Moldovan students are already studying, but the future for sure holds more. We talked to teachers and students and the administration of the institution about opportunities for study and research for our young people. I was absolutely fascinated by the research made at the Kent University. It is an experience that proves once again how much we have worked to transform our education system into one that generates performance and encourage young people to learn and get involved.

I had a meeting with Andrew Parmley, Lord-Mayor, leader of London's financial district. The Lord-Mayor is the mayor of the City of London, with the rank of minister, and leader of London's financial district (City of London Corporation). The Lord Mayor has the important role of promoting the London businesses abroad, he also serves as the chancellor of the City University of London. I told him about Moldova, the facilities we offer to our investors and about our wineries. I, for sure, convinced him about our pro-business government. I hope very much the business interest in Moldova will grow after this discussion.

Meanwhile, we need to work together at home in order to have a common goal, that of seeing the country's development" , wrote the Parliament Speaker on his website.