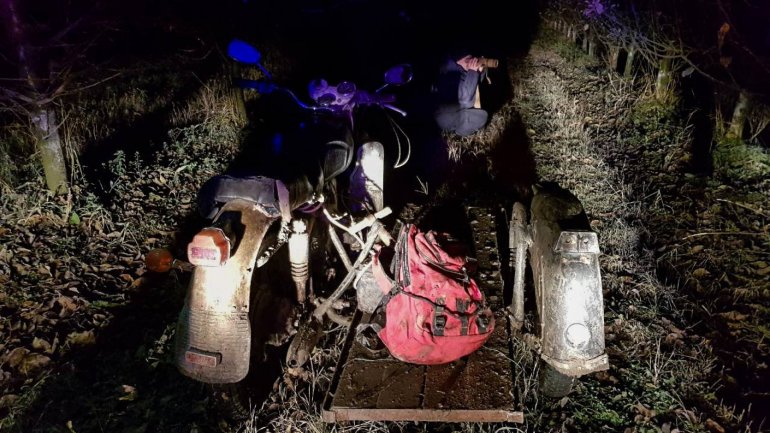 Two motorcycles lacking plates and modified to transport goods were confiscated by Briceni Border Police. More over, one of the drivers lacked a permit for the vehicle, while another managed to escape, abandoning it.

While on duty, a patrol has noticed two motorcycles racing on the highway tying Briceni town with Cotiujeni village. When indicated to pull over, the two ignored the request of officers and continued to speed away. A few km from the site, the vehicles were abandoned, while the drivers used the night to their advantage to hide. A team from North regional District was dispatched to investigate and seize the motorcycles.

Short after, near the border, one of the vehicles and its drivers were found, identified as a 24-year-old villager of Beleavinți,  Briceni. The young men couldn't present any documents for the motorcycle and refused to declare why they ignored the request to pull over. The team also managed to find the second vehicle abandoned with no owner in sight. After searching, he was later found and now officers are taking all necessary measures to make them responsible for their acts.

From the first information it was established that both motorcycles lacked plates and were modified to be able to carry goods used in wood constructions.

Both were seized until the end of the investigation.

At the moment, border police are taking special measures to find all leads, while the drivers risk to be punished according to the law.