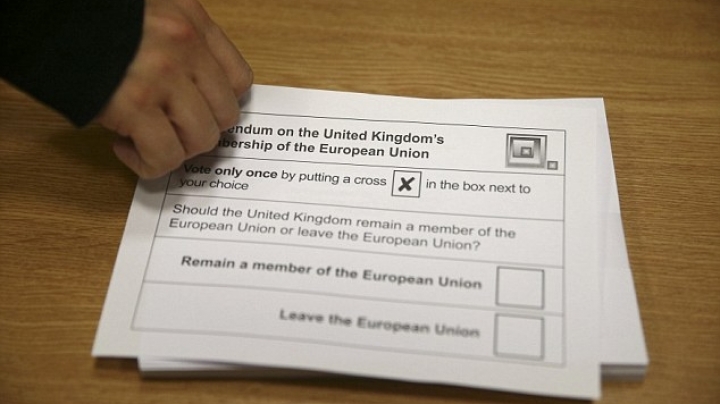 The polls have opened and Britain can finally have its say on whether to stay in the EU or cut our ties with Brussels after a gruelling 10-week campaign, reports Daily Mail.

More than 46.5 million are registered to vote today in a referendum many say is now too close to call.

But torrential rain and flooding caused chaos across London and the south of England overnight, which could reduce turnout and potentially push the result towards a Brexit.

Polling data has made it clear Leave voters tend to be more determined than Remain voters and are less likely to be put off by the bad weather.

Today's EU vote is a historic day for Britain because it is only the third nationwide referendum ever to take place in the UK.

The battle for Britain's future was on a knife edge last night with the final EU referendum polls making the contest too close to call.

An exclusive survey for the Daily Mail and ITV News, gave the Remain camp a lead of six points, by 48 per cent to 42 per cent – but 11 per cent of electors said they were still undecided.

Crucially, the Leave campaign's key message that now is the time for Britain to 'take control' of its own destiny has had the biggest cut-through with voters.

Some 44 per cent said it made them more likely to vote to quit the Brussels club – outstripping the claim by Project Fear that leaving is a leap in the dark.

In a slew of other polls, Leave either led or the contest was neck and neck. The ComRes poll for the Mail reveals Britain is a divided country with over 45s and those in the North breaking heavily for Leave.

Overall, after 'don't knows' are counted, Remain would lead 54 per cent to 46 per cent. The poll of 1,032 adults was conducted over the weekend, during part of which the campaign was halted after the murder of the Labour MP Jo Cox.

Some 17 per cent say that they may still change their mind.

The reputation of key politicians has been hit. The number of voters citing David Cameron as important in their decision has fallen from 34 per cent in May to 26 per cent now.

Only a third of Britons say Mr Cameron would be the best person to negotiate Britain's withdrawal from the EU as Prime Minister in the event of Brexit, though this is higher than anyone else.

In a blow for Chancellor George Osborne, his warning that house prices will be lower in the event of Brexit made people more likely to vote Leave than Remain – by 17 per cent to 20 per cent.

Last night a flurry of eve-of-referendum polls suggested the result is still too close to call, with TNS giving the Brexit camp a 43 per cent to 41 per cent advantage.

But after taking into account the margin of error in the study, the firm declared it impossible to predict a winner.

A week ago, Opinium had the referendum tied at 44 per cent each while at the start of June the pollster had Remain ahead 43-41.

The poll fits with the mixed found by all of the polling firms in the last week of the race, with some results showing small leads for either side while other showed a tie.

By contrast, betting markets have continued to show Remain as the strong favourite as the race enters its final hours.