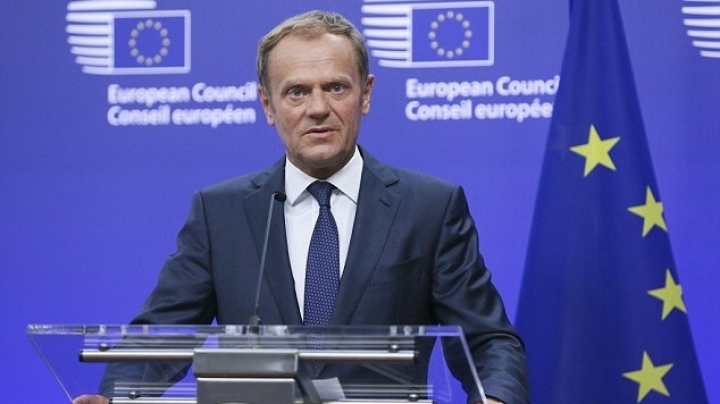 Tusk said Britain's 'historic' vote to leave the European Union should not provoke 'hysterical reactions' and urged the rest of the bloc to 'keep out unity as 27'.

It comes as newspapers and politicians across Europe expressed their shock at Britain's decision to leave - just a day after many pleaded with the UK to stay.

Voters in the UK clearly backed Brexit despite polls previously predicting that the country would remain within the bloc.

Speaking in Brussels on Friday, Tusk said he was confident in the EU's future, adding that 'what doesn't kill you, makes you stronger.'

The European Council leader said:  'I am fully aware of how serious, or even dramatic, this moment is politically. There's no way of predicting all the political consequences of this event, especially for the UK. But for sure this is not a moment for hysterical reactions. I want to reassure everyone that we are prepared also for this negative scenario. As you know the EU is not only a fair-weather project. Today, on behalf of the twenty seven leaders I can say that we are determined to keep our unity as 27. For all of us, the union is the framework for our common future. I would also like to reassure you that there will be no legal vacuum.'

He said that EU law 'will continue to apply to and within the UK' until Britain has formally left the bloc.

He added: 'Finally, it's true that the past years have been the most difficult ones in the history of our Union. But I always remember what my father used to tell me: What doesn't kill you, makes you stronger.'

Schulz tweeted Friday that the 'will of voters must be respected. Now need speedy and clear exit negotiation.'

He says the U.K.'s relationship with the EU had been ambiguous but that 'now it's clear.'

Britain has up to two years to negotiate an exit, but EU officials have been insisting on quick and potentially tough negotiations to discourage the 27 other countries in the bloc from wanting to leave.

The heads of the European Greens party say the European Union needs a reset with the vote to leave in Britain showing that the EU is more divided than ever.

Joint chairs Monica Frassoni and Reinhard Buetikofer say Friday that 'Europe is more divided and less colourful' and that 'we cannot go on with business as usual.'

They said: 'We need to "reset" the EU and together make it able to deliver credible solutions, notably to those facing a persistent economic uncertainty and a growing sense of insecurity.'

As leaders across Europe woke up to the news, France's far-right leader Marine Le Pen changed her Twitter picture to a Union Jack and told her followers the result was 'victory for freedom'.

'As I have been asking for years, we must now have the same referendum in France and EU countries,' she wrote.

The Le Pens, including the convicted racist and anti-Semite MEP and party founder Jean-Marie Le Pen, are fiercely anti-Europe.

They view an end to the EU as the best way of implementing their anti-immigration and anti-globalisation agenda.

Other parties in France, including the governing Socialists, were overwhelmingly shocked and saddened by the result.

President Francois Hollande had made it clear that a leave vote was 'irreversible', and that there will now be 'extremely serious consequences' for the UK.

French foreign minister Jean-Marc Ayrault said he was 'sad for the United Kingdom' and that 'Europe will continue but it must react and rediscover the confidence of its peoples. It's urgent.'

Italian Prime Minister Matteo Renzi said it was necessary to 'change (the EU) to make it more human and more just, but Europe is our home, it's our future.'

Danish Prime Minister Lars Loekke Rasmussen said 'Denmark belongs to the European Union' and the Scandinavian country has 'no plans to hold a referendum on this basic matter.'

He said being member of the 28-member bloc is 'Denmark's best opportunity to influence the world.'

Referendums across the EU 'must be food for thought,' he said, adding it shows a euroskepticism 'that we as decision-makers must take very seriously.'

In Norway, which is not an EU member, Prime Minister Erna Solberg told Norwegian broadcaster NRK she was confident that the EU would 'find solutions to this.'

Meanwhile Dutch Prime Minister Mark Rutte said he 'deeply regretted' the decision but 'European co-operation will have to continue'.

He added that Brexit 'appeared irreversible but the process to leave may take a long time' and 'may not start until after the German elections' which are due between August and October 2017.

Rutte also dismissed right-wing politician Geert Wilders' call for a Dutch vote on the EU, saying 'I don't think the Dutch are currently interested in having a referendum on that.'

The prime minister says the Dutch understand that 'cooperation with other countries in a common market ... is vital for our country.'

He was one of a number of European leaders to voice their shock at the result this morning.

Gabriel, who is also Germany's economy minister said on his official Twitter account: 'Damn! A bad day for Europe!'

Foreign Minister Frank-Walter Steinmeier said that 'it looks like a sad day for Europe and for the United Kingdom.'

German officials have repeatedly said that they wanted Britain to remain in the EU.

He wrote on Twitter: 'Please tell me I'm still sleeping and this is all just a bad nightmare! Usually these things advance in three stages 1. Crisis; 2. Chaos; 3. Sub-optimal solution. Don't know where we are at this stage.'

Meanwhile the result also triggered Dutch far-right MP Geert Wilders to call for a referendum on EU membership in the Netherlands.

Wilders, who is leading opinion polls, said if he is elected prime minister in March he will force a vote.

He said in a statement: 'We want to be in charge of our own country, our own money, our own borders and our own immigration policy. As quickly as possible the Dutch need to get the opportunity to have their say about Dutch membership of the European Union. If I become prime minister, there will be a referendum in the Netherlands on leaving the European Union as well. Let the Dutch people decide.'

German tabloid Bild, who yesterday offered 11 hilarious reasons for Britain to remain, posted on their website a picture of dejected Remain supporters with the headline: 'Britain Out.'

It went on to list eight things it must do to become 'adorable' again, including cutting back on bureaucracy, EU Commission costs and putting an end to the 'circus' of having the EU parliament sit in Strasbourg as well as Brussels.