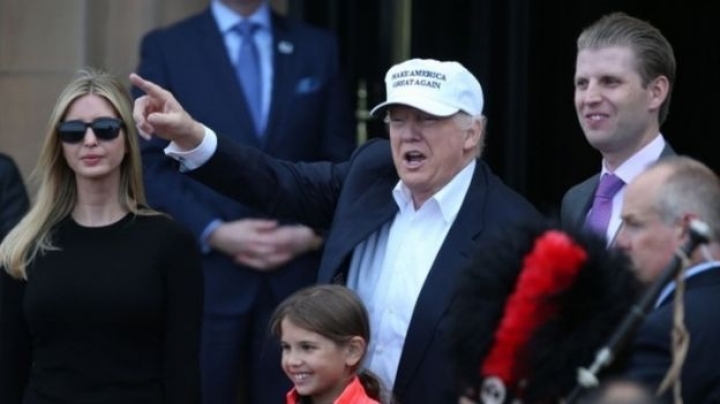 US presidential hopeful Donald Trump has said it is a "great thing" that the people of the UK have "taken back their country" in voting to leave the EU, reports BBC.

His comments came as he arrived at Trump Turnberry for the reopening of the refurbished Open venue golf resort.

Mr Trump added his name to the Ayrshire hotel and golf course after buying the resort for an undisclosed fee in 2014.

Protests are expected against the presumptive Republican nominee by those who accuse him of "racism and bigotry".

Mr Trump said UK divisions "will heal" as "it is a great place", adding: "I said this was going to happen and I think it is a great thing. Basically, they took back their country. That's a great thing. I think we're doing very well in the United States also, and it is essentially the same thing that is happening in the United States. I want to support my son who really represented me here in building this great great place (Turnberry)."

When asked his opinion on David Cameron announcing he is to step down as Prime Minister after the Leave vote, Mr Trump said: "Well, that's too bad."

The outspoken billionaire has been a controversial figure during his campaign for the Republican presidential nomination, most notably calling for a temporary ban on Muslims entering the US following the San Bernardino shootings in California.

This prompted a petition advocating a ban on Mr Trump coming to the UK, whichattracted hundreds of thousands of signatures. This in turn triggered a debate at a Westminster committee room, which ended without a vote being taken.

Mr Trump's comments on Muslims were described as "divisive, unhelpful and quite simply wrong" by Prime Minister David Cameron and "repugnant and offensive" by Scotland's First Minister Nicola Sturgeon.

They said they wanted to "show solidarity" with the people of Mexico after Mr Trump outlined plans to build a wall along the US-Mexico border to stop illegal immigrants.