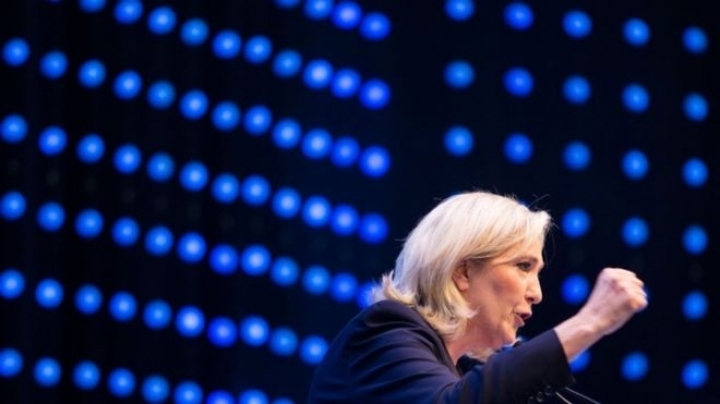 The UK's vote to leave the EU has sparked demands from far-right parties for referendums in other member states, reports BBC.

The UK voted by 52% to 48% to leave the EU after 43 years. David Cameron has announced he will step down as PM.

Global stock markets fell heavily on the news and the value of the pound has also fallen dramatically.

The European parliament has called a special session for next Tuesday.

Analysts say EU politicians will fear a domino effect from Brexit that could threaten the whole organisation.

Ms Le Pen hailed the UK vote, placing a union jack flag on her Twitter page and tweeting: "Victory for freedom. As I've been saying for years, we must now have the same referendum in France and other EU countries."

She is the front-runner among candidates for the presidential election in 2017 but opinion polls suggest she would lose a run-off vote.

The EU worries Brexit could reverse 70 years of European integration.

In all my years watching European politics, I have never seen such a widespread sense of Euroscepticism.

Plenty of Europeans looked on with envy as Britain cast its In/Out vote. Many of the complaints about the EU raised by the Leave campaign resonated with voters across the continent.

Across Europe leading Eurosceptic politicians queued up this morning to crow about the UK referendum result.

But the mood in Brussels is deeply gloomy. The Brexit vote sends screaming alarm bells, warning that the EU in its current form isn't working.

Last Friday, Ms Le Pen had told a gathering of far-right parties in Vienna: "France has possibly 1,000 more reasons to want to leave the EU than the English."

She said the EU was responsible for high unemployment and failing to keep out "smugglers, terrorists and economic migrants".

Mr Wilders, leader of the Party for Freedom in the Netherlands, said in a statement: "We want to be in charge of our own country, our own money, our own borders, and our own immigration policy.

"As quickly as possible the Dutch need to get the opportunity to have their say about Dutch membership of the European Union."

The Netherlands faces a general election in March and some opinion polls suggest Mr Wilders is leading. A recent Dutch survey suggested 54% of the people wanted a referendum.

The populist Danish People's Party, which wants renegotiation with the EU, hailed a "courageous" decision by the British, but also said that everyone should "keep their heads".

But Donald Tusk, the president of the European Council, said this was "not a moment for hysterical reactions".

He said he was "determined to keep our unity as 27" members, adding that: "Until the UK formally leaves the EU, EU law will continue to apply to and within the UK, and by this I mean rights as well as obligations."

"The European Union has failed as a political union," she said.