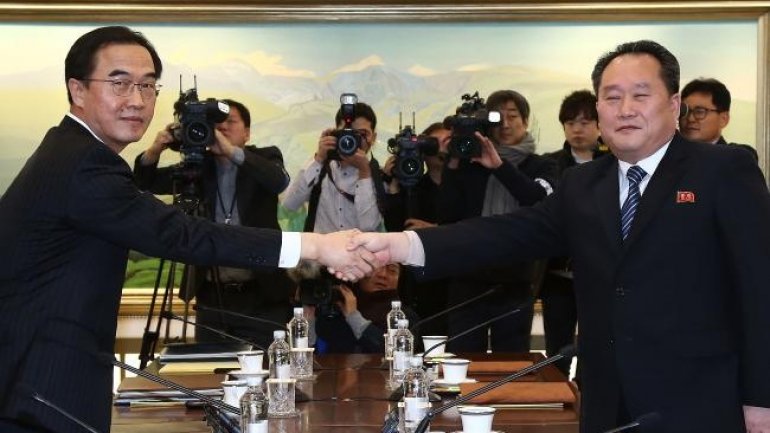 IN a massive breakthrough, North Korea will send athletes to the Winter Olympics in South Korea.

In talks held at the border in the truce village of Panmunjom, North Korean negotiators accepted South Korea’s request to send a large delegation to the Winter Olympics in Pyeongchang, South Korean media reports.

The North will send a cheering squad and a performance-art troupe, The New York Times reports.

It will be the first time North Korea has taken part in the Winter Olympics in eight years.

The agreement came after a North Korean delegation traveled to the demilitarized zone for talks.

The talks come after the North’s leader Kim Jong-un indicated in his New Year’s speech that Pyongyang was willing to send a delegation to the Winter Olympics.

Seoul responded with an offer of a high-level dialogue, and last week the hotline between the neighbors was restored after being suspended for almost two years.

Moments before Seoul’s five-member delegation left for the talks at the village, Unification Minister Cho Myung-Gyun said the two sides would focus on the North’s participation in the Pyeongchang Games but the agenda would also include ways to thaw frosty ties.

“Today, we will discuss North Korea’s participation in the Pyeongchang Olympics and Paralympics and the issue of improving inter-Korean relations as well,” Cho, who led the South’s delegation, told journalists.

He said relations between the two Koreas had been in limbo for a long time. “We will do our best to ensure that the Pyeongchang Olympics and Paralympics will take place as a peace festival and that this meeting will serve as the first step for improving South-North ties,” he added.

They are also expected to propose they march together behind a “unified Korea” flag during the opening and closing ceremony of the Olympics.

Seoul has been keen to proclaim the Games in Pyeongchang, just 80 kilometers south of the Demilitarized Zone (DMZ) separating the two countries, as a “peace Olympics” in the wake of missile and nuclear tests by the North — but it needs Pyongyang to attend to make the description meaningful.

The size and membership of the North Korean delegation and their accommodation — widely expected to be paid for by Seoul — will also be discussed.