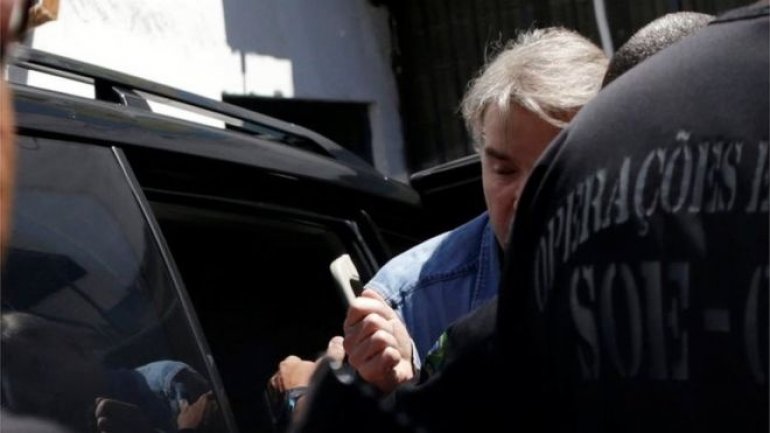 A business tycoon who was once Brazil's richest man has turned himself in to police after landing in Rio de Janeiro on a flight from New York.

Police had issued an arrest warrant for Eike Batista on Thursday but did not find him at his Rio mansion.

He is accused of paying bribes to officials in Rio de Janeiro's state government, which he denies.

Before boarding the plane, Mr Batista said he was returning to Brazil to clear his name.

Mr Batista was declared a fugitive by Brazilian officials after police raided his estate in Rio de Janeiro and found he had left for New York just hours earlier.

BBC South America business correspondent Daniel Gallas says there was much speculation on whether Mr Batista would return to Brazil or use his German passport to flee to Europe.

But Mr Batista said the trip to New York was not an attempt on his part to flee justice, informs BBC.

He was met by police who escorted him off the plane.

Mr Batista is expected to undergo medical exams before being questioned about his alleged involvement in a corruption ring involving powerful business people and influential politicians in Rio de Janeiro state.

Investigators accuse Mr Batista of paying the then-governor of the state, Sergio Cabral, $16.5m in bribes to win government contracts.

As a result of Operation Car Wash, more than 100 people, including Brazil's most powerful building tycoon, Marcelo Odebrecht, have been convicted of crimes such as bribery, racketeering and money-laundering.