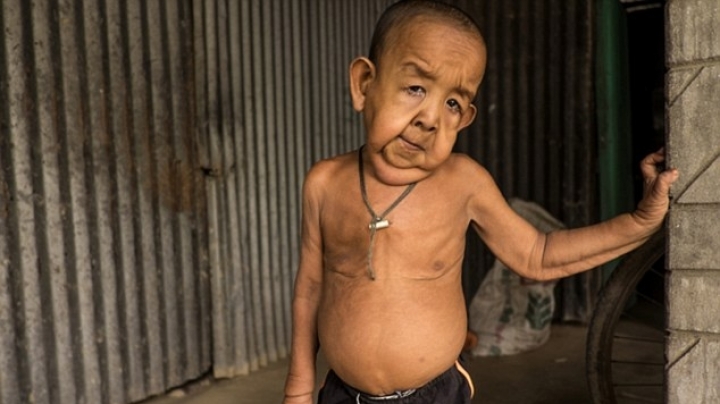 A four-year-old boy resembles an 80-year-old pensioner due to an incredibly rare condition, reports Daily Mail.

People in the community stay away from him and children are afraid to play with him, despite him having above average intelligence.

Bayezid is believed to suffer from progeria, which ages the body at eight times the normal rate.

The disorder is said to have inspired the F Scott Fitzgerald novel and Brad Pitt movie The Curious Case of Benjamin Button, in which the character is born an old man and ages backwards.

Progeria patients normally die from heart attacks or strokes at an average age of 13.

Bayezid also has a form of cutis laxa, a rare connective tissue disorder in which the skin hangs loosely in folds.

His 18-year-old mother, Tripti Khatun, says she is amazed at how clever her son is, but it breaks her heart that his appearance is so unusual.

When Bayezid was born at a government maternity hospital, in 2012, Tripti and her husband Lovelu Hossain, 22, were devastated as doctors had no idea how to treat him.

After they returned home the news of their abnormal child quickly spread around the village and neighbours lined up outside the family's home to see him.

But Tripti and her husband said they received no support from the local community.

People feared being close to Bayezid and often gossiped about the couple’s capabilities as parents, as Tripti and Lovelu are first cousins.

In rural parts of Bangladesh and southern Asia it is normal practice for cousins to marry, and the pair tied the knot at 13 years old.

Debashis Bishwas, a consultant from Magura Central Hospital, in Magura, met with Bayezid last month and told his parents he believes he is suffering from progeria and cutis laxa.

He said he fears he may only live for 15 years.

Lovelu understands there may not be a cure for his son’s condition but he fears Bayezid is not getting the best possible chance of survival because the family are poor.