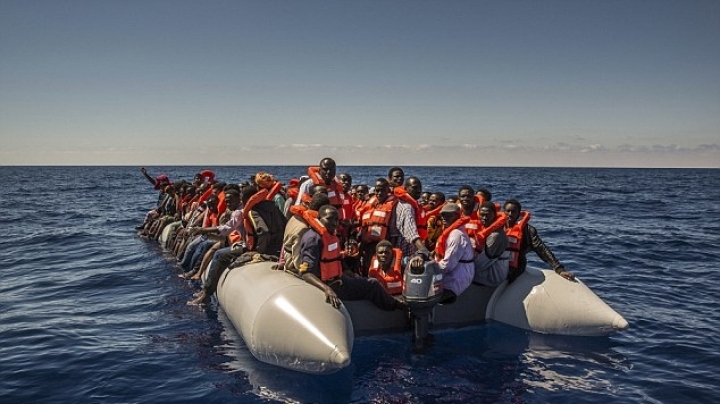 Mystery surrounds the deaths of 22 migrants - 21 women and one man - whose bodies were found on a rubber dinghy just hours after they had set off from the Libyan coast  for Italy, reports Daily Mail.

But after the migrants clambered to safety on the MSF boat they discovered a pile of bodies at the bottom of one of the dinghies, lying in a pool of fuel.

Jens Pagotto, MSF's Head of Mission for Search and Rescue Operations, said: 'It is still not entirely clear what happened, but they died a horrible death. It is tragic.

'It seems that water and fuel mixed together and the fumes from this might have been enough for them to lose consciousness.'

The survivors, who are mostly believed to be from Nigeria and Guinea, are now being brought to the Sicilian port of Trapani, where they are expected to arrive tomorrow.

Mr Pagotto said the two dinghies had probably left Libya in the early hours of Wednesday and were picked up 17 nautical miles east of Tripoli.

The Italian coastguard received a distress call at about 10am local time yesterday and notified the MSF ship MV Aquarius, which took three hours to reach the scene.

An Italian naval vessel also helped with the rescue.

Mr Pagotto said a team of trauma specialists would be on hand to help the survivors when they reached land.

Most come on overcrowded boats in search of a better life in Europe, as people smugglers take advantage of calm seas and good weather.

Italian coastguards recovered 2,500 people on Tuesday and found one body on a boat, followed by another 600 survivors yesterday.

But the numbers have fallen slightly since last year - 79,861 migrants have arrived in Italy by sea so far in 2016, compared with 83,119 during the same period last year.

The International Organization for Migration said almost 3,000 migrants have died or gone missing in the Mediterranean in the first seven months of this year.