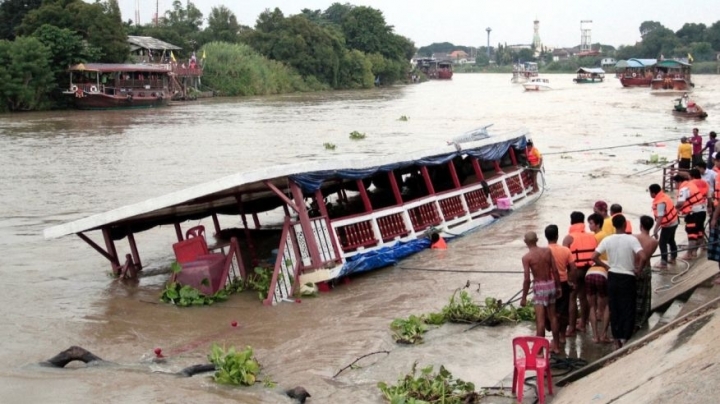 At least 13 people have been killed, with 10 more missing, after a boat carrying Muslim pilgrims sank on Thailand’s Chao Phraya river after hitting a bridge, reports The Guardian.

The accident happened on Sunday near the ancient city of Ayutthaya, a popular tourist attraction. No foreigners were believed to be among the dead.

Video footage posted by Khaosod TV showed desperate scenes as rescue workers scrambled to reach the stricken two-floor vessel, its lower deck submerged under the water. Rescuers threw ropes to help people swim to land as others tried to resuscitate victims on the banks of the river. About 100 people were believed to have been on board when the boat went down.

“There are 13 confirmed dead and 33 injured so far,” said Udomsak Khaonoona, disaster prevention chief for the city 50 miles north of Bangkok. “The boat tried to avoid another vessel and crashed into the concrete column of a bridge,” he said.

Rewat Prasong, deputy governor of Ayutthaya province, said most of those on board the boat were local Muslim pilgrims returning from a nearby mosque. “The boat driver may not have been used to this area and there was a strong tide today,” he said, adding 10 people were unaccounted for.

Despite its wealth compared to regional neighbours and huge tourism sector, accidents are common on Thailand’s public transport network. Safety regulations are often weakly enforced. The country has one of the world’s worst road traffic death rates, and crashes of speedboats operating between the popular southern tourist islands are also common.