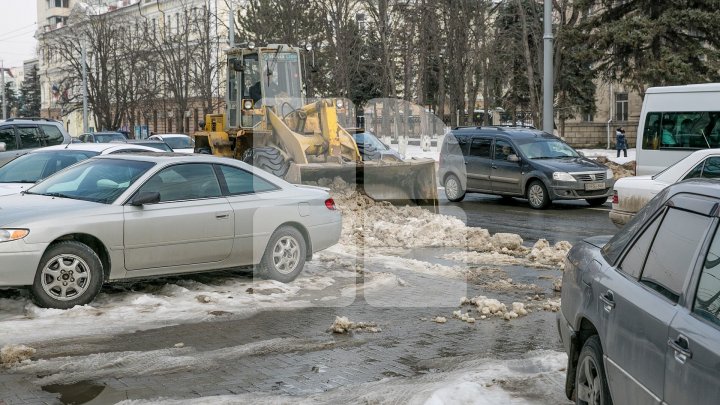 The effort of Exdrupo workers to remove snow from the Capital has been, in some cases, frustrated by drivers who have badly parked their cars: on the roadside or in the courtyard of the blocks, blocked access to the machines.

"We intercede with a request to the citizens not to block the access roads of the snow removal technique and to observe the traffic regulations, not to park on the lawns, on the sidewalks and not to block the yards", said Eugen Veisea, Commander of the pluton, the National Patrolled Inspectorate.

Last night, the road workers removed snow on the edge of the road where it was possible.

"Today we will go to areas where yesterday we did not have the possibility because of parked cars irregularly, we will continue to press the anti-skid material if necessary", explained Sergiu Tomita, Production Manager, EXDRUPO.

The workers say it's hard to work when the cars are parked idly:

"With such a great technique it's hard to clean when it's cars, circulation, no mind is learned, there is more, but we do not. two evenings where they can take them and widen the road to get around".

If some drivers have apologized, others have avoided the discussion with the Publika TV team:

" - You parked it in a rather inappropriate place.
- No, it's the black one in the normal parking lot. Yes you see the yard is full, that is, it does not depend only on me, not just my car.

- Who among the drivers parked here?".

Some " Some pedestrians are disturbed by the attitude of the drivers:

"Sometimes on the sidewalk is parked, yes, how to go to despair, it was never like in people".

Last night, in the capital, 39 cars were removed to remove the snow.