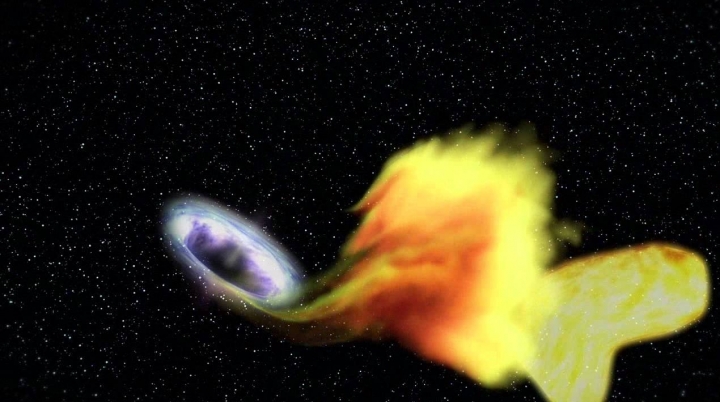 According to NASA, when black holes swallow stars, they release a burst of energy, a flare containing high-energy radiation, including ultraviolet and X-ray light. Now, astronomers have been able to observe the flares for the first time.

Two studies examined these galactic burps, which destroy the space dust closest to the black hole. A little further out, the heat isn’t as intense and the dust can survive.

Using data from NASA’s Wide-Field Infrared Survey Explorer (WISE), the astronomers were able to measure the radiation this “hot dust” gives off. The dust, which can’t be seen with the naked eye, forms a shell that extends a few trillion miles from the black hole, or about half a light year away, NASA stated.

“The black hole has destroyed everything between itself and this dust shell,” Sjoert van Velzen, postdoctoral fellow at Johns Hopkins University and lead author of one of the studies, said in a NASA news release. “It’s as though the black hole has cleaned its room by throwing flames.”

Examining the dusty shell can also give scientists clues about the black hole and its meals.

“Our study confirms that the dust is there, and that we can use it to determine how much energy was generated in the destruction of the star,” Varoujan Gorjian, an astronomer at NASA’s Jet Propulsion Laboratory and co-author of the paper, said in the news release.

That study found three flares, while a second study ― led by Ning Jiang of the University of Science and Technology of China ― found a fourth.