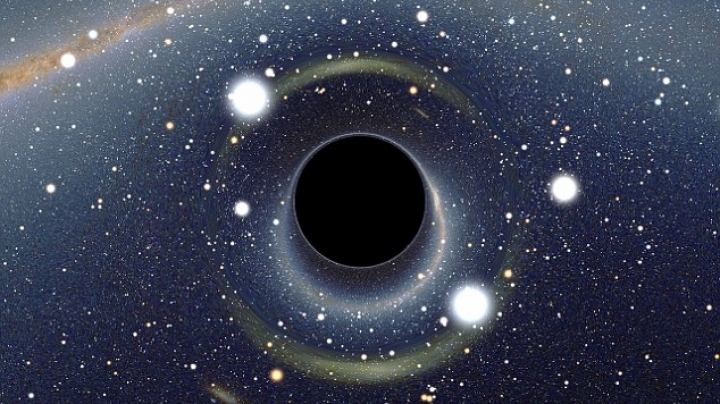 A black hole is often thought of as something so dense that nothing, not even light, can escape.

Although their name suggests otherwise, black holes are not completely black – instead they emit incredibly weak particles as a kind of quantum radiation.
Now this quantum effect, known as ‘Hawking radiation’, has been seen in the laboratory for the first time.

In 1974, Stephen Hawking suggested black holes cannot be completely black, and instead quantum effects mean radiation escapes from their boundaries.

Hawking's theory states black holes should have the ability to thermally create and emit sub-atomic particles, known as Hawking radiation, until they are completely depleted of their energy.

In his 1974 announcement, Hawking explained how the strong gravitational field around a black hole can affect the production of matching pairs of particles and anti-particles, as is happening all the time in empty space, according to quantum theory.

If the particles are created just outside the event horizon of a black hole, then it is possible the positive member of the pair may escape - observed as thermal radiation emitting from the black hole - while the negative particle may fall back into the black hole.

Using a material called a Bose-Einstein condensate, Professor Steinhauer created the same conditions but for sound.
During experiments two years ago he found the energy that makes up sound waves did in fact 'leak' out of the black hole, as Hawking predicted.