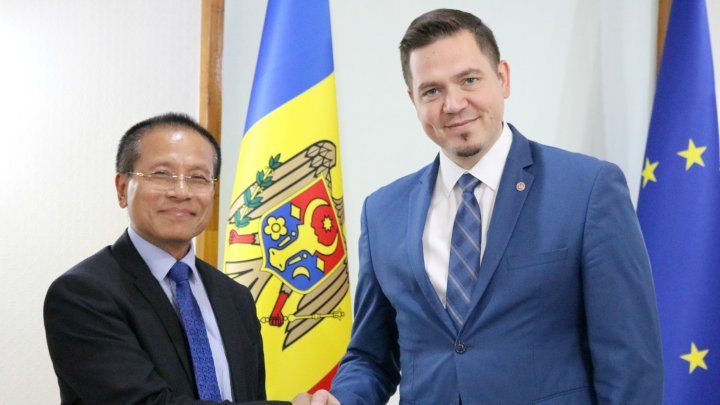 Moldovan-Indian relations development, bilateral cooperation within international organizations, as well as the opportunities to diversify the commercial-economic relations were discussed today by the Minister of Foreign Affairs and European Integration, Tudor Ulianovschi, with the approved Ambassador of the Republic of India to Republic of Moldova, Thanglura Darlong.

During the dialogue, the head of the Moldovan diplomacy mentioned that the Republic of Moldova is interested in the development of the bilateral relations with India. To this end, the decision to open a diplomatic mission to New Delhi was adopted, which would create the necessary premises for the boosting of the relations between the two countries on all sizes.

Referring to bilateral co-operation, Minister Tudor Ulianovschi praised the support of the New Delhi Government for the training of civil servants in our country through the Technical and Economic Assistance Program of the Republic of India, including the training courses for young diplomats within the MFAEI, by the Institute for Foreign Affairs of the Ministry of Foreign Affairs of the Republic of India. In the context of the creation of the National Diplomatic Institute, the head of the Moldovan diplomacy expressed the interest of the MFAEI to establish a partnership with the respective institution in India for the purpose of exchanging experience on the training of diplomatic staff and national civil servants.

In turn, Ambassador Thanglura Darlong reiterated his country's interest in expanding and deepening cooperation relations with the Republic of Moldova in the most diverse areas of mutual interest, including agriculture, pharmaceuticals, information technologies and others.

The interlocutors expressed their conviction that the visit of the Minister of Foreign Affairs and European Integration of the Republic of Moldova to India on August 10-15 will be an important step in deepening and developing bilateral relations, initiating new investment projects with the participation of Indian companies.