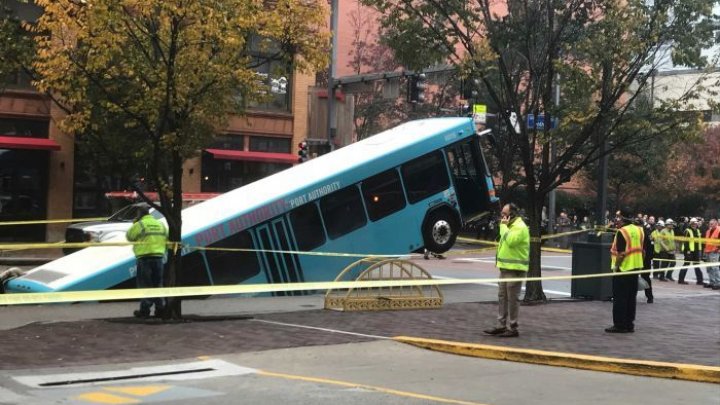 A bus carrying two people has fallen into a sinkhole which opened up on a city street during morning rush hour in Pittsburgh, Pennsylvania.

The bus was reportedly stopped at a red light when the back end of the vehicle dropped down into the sinkhole on 10th and Penn Avenue just before 8:00am on Monday.

The driver of the bus and a 56-year-old female passenger were aboard when the vehicle plunged into the hole, according to the Port Authority of Allegheny County.

Officials said the passenger was treated at a hospital and released.

He said there were also fibreoptic cables, and damage to them could affect communications in the tri-state area.

After a 272-tonne crane lifts the 12.7-tonnes bus, the power and fibreoptic lines and pipes below will be assessed and repaired.

Lacretia Wimbley, a reporter with the Pittsburgh Post-Gazette, said officials had removed a blue Kia sedan from behind the bus.

The car's front wheels were over the sinkhole when the bus was swallowed.

"There was one person in the car and two inside the bus, including the bus driver. Bus passenger suffered minor injuries. Authorities still deliberating on a plan," Ms Wimbley said.