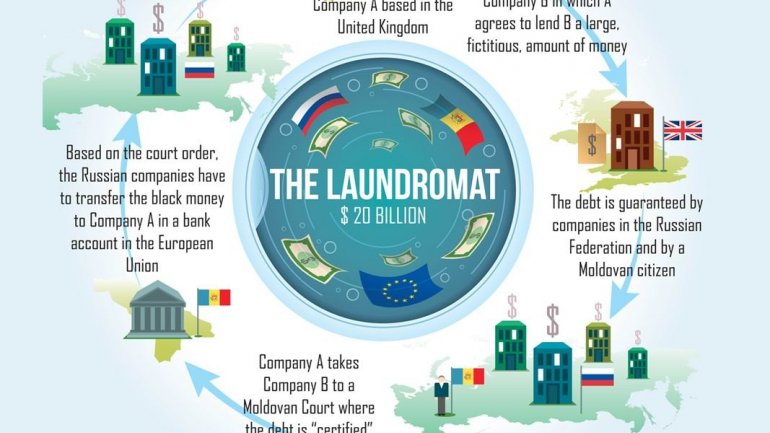 New details and persons in the so-called Russian laundromat or laundry.

According to an investigation by Novaya Gazeta, The Guardian and Sueddeutsche Zeitung, the question is about employees of the Russian Federal Security Service (FSB), Russian bank managers and Moldovan judges and bailiffs.

Novaya Gazeta writes that 22 billion dollars from Russia were washed and reached the accounts of over 5,000 companies from 96 countries.

In the fall of 2014, two FSB officers, Alexei Shmatkov and Yevgeny Volotovski, came in a special mission to Moldova: to learn the state of the probe on the Russian laundry.

Passports were issued to them a day before arriving in Chișinău. Novaya Gazeta writes that about 20 Russian banks ‘washed’ money through Moldindconbank and by decisions by Moldovan courts.

The press wrote Veaceslav Platon, aka the CSI number one raider, would have been behind these scams. $10.6 bn were washed through two Russian banks only.

The mastermind of this scheme, Alexandr Grigoriev, the manager of the two banks, had as partners an FSB general Iuri Ansimov and the cousin of the Kremlin leader, Igor Putin.

In the fall of 2012, a British company sued a Russian company owned by a Moldovan.

The motive was a debt of $400 mn. The case reached the Chisinau judge Valeriu Gîscă.

After uttering the sentence, the bailiff Svetlana Mocan started the procedure of forced recuperation of the money. She had accounts at Moldindconbank, which also served the two Russian banks.

Thus the money got to the bailiff, and then it was transferred to the accounts of the British company. Thus, from July till September 2012, almost $25 mn were washed.

In the Russian laundromat, the money came from smuggling appliances, clothes and weapons, stealing bank assets, and financing political projects in Europe. Criminal probes are under way in European countries, and some banks lost their licenses.

Although Russia suffered the most because of the laundry, the investigation is trailing there.