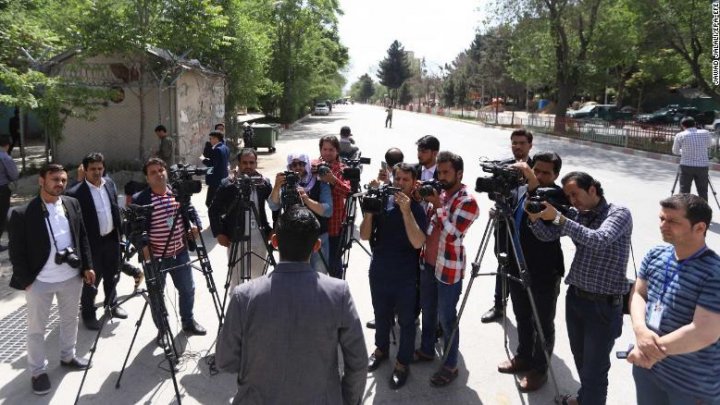 foto: An official briefs journalists at the scene of the blasts in Kabul on Monday.
AFLĂ imediat Știrile Publika.MD. Intră pe Telegram

Nine journalists were among 30 people killed in a series of attacks in Afghanistan on Monday, including a BBC reporter and a well-known photographer who had written of the dangers of reporting in the Afghan capital, writes CNN.

The second explosion came as the attacker, posing as a cameraman, detonated explosives as journalists huddled around the scene, Kabul City Police spokesman Hashmat Stanikzai told CNN.
In a statement issued via the social media app Telegram, ISIS said a "martyrdom brother" blew his explosive vest up among a group of "apostates" and killed and wounded a number of them. The group named the first bomber as Qaqaa al-Kurdi and the second attacker as Khalil al-Qurshi. ISIS did not provide any evidence for the claim.
Eight journalists, including at least one woman, died in the blasts, according to Sharifi.
SharifiIn a tweet Monday, AFP's Global News Director, Michele Leridon, honored Marai for his "extraordinary strength, courage and generosity" and praised his "consummate professionalism" and "sensitivity" during his 15 years covering the Afghan conflict for the news agency.
AFP said the death of its "treasured colleague" Shah Marai in Monday's twin blast in Kabul was "a devastating blow".
Leridon sent "condolences to the families of other journalists killed in this terrible attack".
A further 45 people were injured in the two incidents, and have been taken to city hospitals, according to Ministry of Public Health spokesman Wahid Majroh.
The agency said Marai joined AFP as a driver in 1996, the year the Taliban seized power, and in 2002 he became a full-time photo stringer, rising through the ranks to become chief photographer in the bureau.
AFP Global News Director Michele Leridon released a statement on the death of the long-serving photographer.
"This is a devastating blow, for the brave staff of our close-knit Kabul bureau and the entire agency. Shah Marai was a treasured colleague who spent more than 15 years documenting the tragic conflict in Afghanistan for AFP."
He leaves behind six children, including a newborn daughter, AFP said.
In an essay entitled "When Hope is Gone," written in 2016 -- before the birth of his sixth child -- he acknowledged the danger of living in the city with his young family.
"I don't dare to take my children for a walk. I have five and they spend their time cooped up inside the house.
"Every morning as I go to the office and every evening when I return home, all I think of are cars that can be booby-trapped, or of suicide bombers coming out of a crowd. I can't take the risk."
The site of the explosion was close to NATO's Afghan headquarters, the US embassy and Afghan government buildings, including the Presidential palace, the Defense Ministry and the headquarters of Afghanistan's intelligence services.
US Ambassador John Bass condemned the attack.
"I condemn today's terrible Kabul attack (and) reaffirm our commitment (to) stand with the Afghan people in their fight for peace (and) security across Afghanistan. We mourn for those murdered, including the brave journalists who stand for truth in the face of violence," he wrote on Twitter.
AFLĂ imediat Știrile Publika.MD. Intră pe Telegram