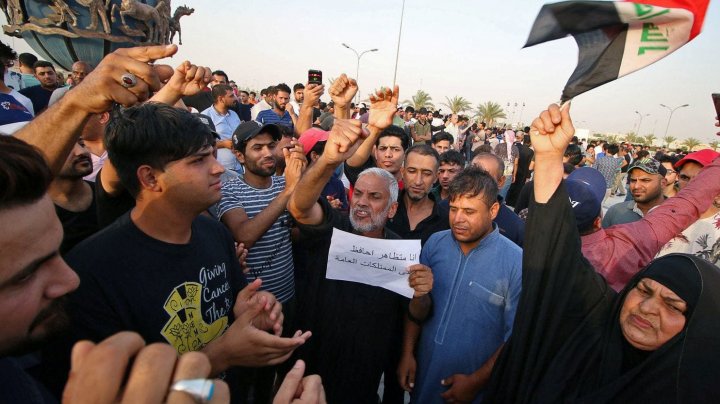 While Basra was once famed for its Venice-like canals, today its waterways are clogged with trash.

The brackish water pouring from the taps of homes in Basra has made a mockery of the southern Iraqi city's old moniker of "Venice of the East" for what was once a network of freshwater canals.

In recent months, thousands of residents have been treated for stomach bugs or skin rashes caused by contaminated water that, along with failing services and soaring unemployment, has fueled violent unrest in the country's oil capital.

Zaydoun Faysal, a 44 year-old resident in Basra, has resported to buying water in plastic containers to wash himself and his family.

"We in Basra are wealthy with oil, why do we have such poverty. There are no public services, water is poisoned, no health service, no education and no employment," said Zaydoun.

Basra and other cities in Iraq's southern Shiite heartland are convulsing with the most serious protests in years.

In recent days, protesters have attacked government offices and the Iranian consulate.

Many blame their woes on neighbouring Iran's outsized influence on Iraqi politics and are calling for radical change.

At least 15 people were killed and 249 injured in clashes between protesters and security forces this week, health officials say.

The protests calmed on Sunday after the government in Baghdad sent troops to reinforce the police, and Shiite militias backed by Iran vowed to restore order.

Duhaa Mayaa is a 42-year-old mother who has started treating wounded protesters with first aid kits she bought for herself and her two children.

Mayaa learned from a pharmacist early on to treat tear gas exposure with a Pepsi wash, or with a tonic of clean water and bread yeast.

Nearly every household in Basra can point to a family member that has required hospital treatment for stomach illness in recent months.

Health officials in late August said 17,000 people had been hospitalized for stomach illness.

But hospitals say they believe the numbers are far higher.

The Sadr Hospital said its emergency room was receiving 600 cases of stomach distress each day.

After protests flared in July, officials promised to hire thousands of new municipal employees, but the announcement only mollified the city for a month, until the unrest started again this week.