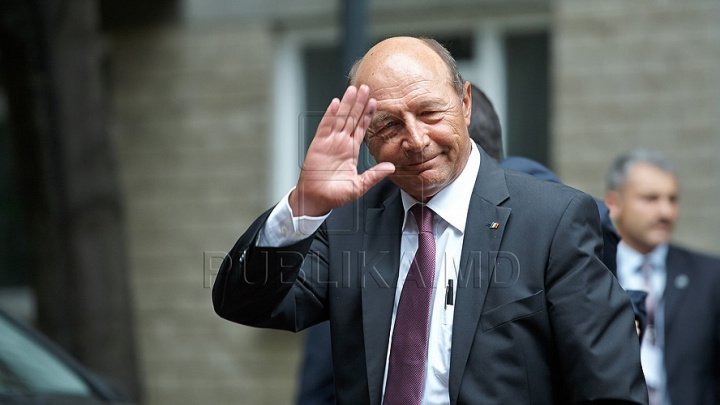 It's childish to ask some parties to withdraw their candidates from the election. This is a comment of the Romanian former president Traian Băsescu on Andrei Năstase's request to Constantin Codreanu, National Unity Party (PUN) candidate at Chisinau election.

Moreover, the Romanian politician claims that Andrei Năstase would lose the battle in the second round no matter who competes him.

The honorary president of PUN said the elections are test for all parties, and which party know they don't stand a chance should realize this.

"I know for sure that your chance is slim, you have to appreciate them. The appeal for the candidate withdrawal is childish. I'm not going to borrow wrinkles from Chisinau for political life," said Tranian Băsescu, honorary president of PUN.

The Honorary President also referred to the results of the poll presented today in Chisinau, which shows that Andrei Năstase, the candidate of the Dignity and Truth Party, has no chances of becoming mayor of Chisinau.

"Between Andrei Năstase - Ion Ceban, Ceban wins far above the margin of error, with six points difference of 53 to 47. Andrei Năstase loses on the line in front of any candidate. Mr. Munteanu loses and his reign on the line," said Tranian Băsescu, Honorary President of PUN.

Previously, PDA leader Andrei Năstase urged pro-European party candidates to withdraw from the electoral race in his favor. No political party responded to the appeal. At the conference, being asked by journalists if he wanted PAS leader Maia Sandu to be a candidate in the mayoralty instead of Andrei Nastase, Traian Basescu said he would have created an alliance with PAS.

"If it was Maia Sandu, I did not have a candidate."

Earlier, PUN candidate for Chisinau mayor Constantin Codreanu said he regrets that Maia Sandu did not run because he did not understand the stakes of these local elections. According to him, Sandu would have had every chance of getting the mayor's chair.