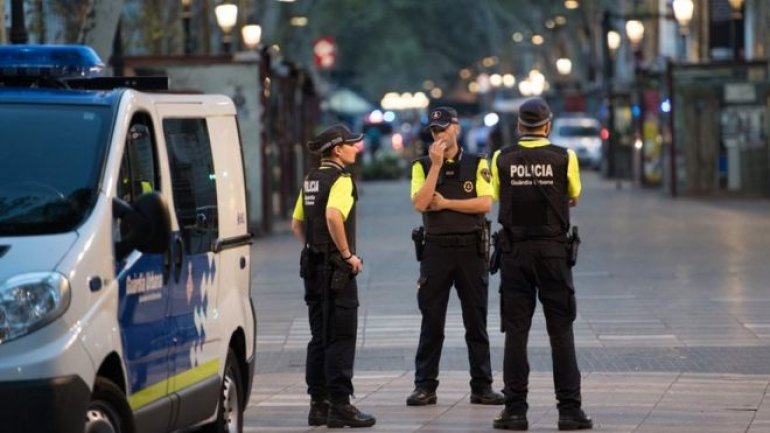 The hunt for the driver suspected of killing 13 people in last week's attack in Barcelona has been extended across Europe, Catalan officials say.

Officials say they have confirmed the driver's identity as 22-year-old Moroccan Younes Abouyaaqoub.

Authorities earlier said they could not rule out the possibility that he had slipped across the border to France.

New CCTV footage from the day of the attack appears to show him fleeing the scene on foot.

Police say they are investigating the possibility that, some 90 minutes later, the suspect stabbed and killed a Spanish man and stole his car.

Two hours after the attack, 34-year-old Pau Perez from Vila Franca was found dead in his vehicle. He is the 15th person confirmed dead following the two attacks.

Thirteen were killed when the van, allegedly driven by Abouyaaqoub, swerved through crowds in the busy area Las Ramblas in Barcelona on Thursday, and one woman died during a second attack in Cambrils hours later, in which five attackers were killed by police.

On Sunday, Catalan police chief Josep Lluis Trapero said that of the 12 suspects, only one - assumed to be Abouyaaqoub - remained at large.

Four were under arrest and there were two sets of human remains to be identified, he said. Five were killed during a second attack in Cambrils.

French media report that the vehicle used in Cambrils had been caught on speed cameras in France's Essonne region the previous week. But a direct link between the group of attackers in Spain and the car's appearance in France has not yet been established.

It has now emerged that an imam living in the town of Ripoll, where Abouyaaqoub and several other suspects came from, is suspected of recruiting young people to an extremist cause.

A picture is now emerging of Imam Satty as a possible ringleader or key organiser of the 12-strong terror cell, the BBC's Europe reporter Gavin Lee said.

The imam apparently left the mosque in June for an extended trip to Morocco, but a flatmate told the BBC he had been seen in Ripoll as recently as last Tuesday.

The father of two of those shot dead by police in Cambrils, Mohamed and Omar Hychami, told the BBC he was devastated. Hecham Igasi also accused the imam of radicalising his sons.

The search for Imam Satty has lost some urgency after police suggested he may have died in an explosion in Alcanar on Wednesday.

The explosion is believed to have been an accident during the manufacture of explosives the group was making.

The group had apparently been planning three coordinated attacks using the home-made bombs. Police found about 120 gas canisters at the site.