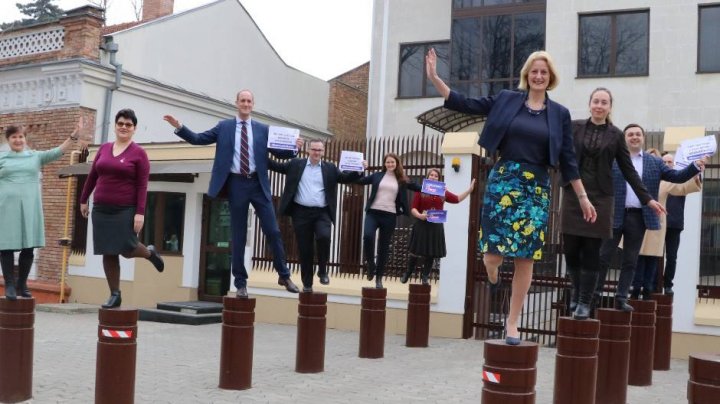 Dedicated to the International Women's Day, Embassies and International Organizations in Chisinau are carrying out campaigns Balance for Better with various meaningful messages.

The British Embassy set off online challenge and posted on Facebook their though-provoking words to empower women to achieve more of the potential.

"This week, ahead of International Women's Day, we are celebrating the work of women around the world - and starting an online challenge. The British Embassy team has signed up to this year's theme: #BalanceforBetter. For us, a better society means a balanced society. The British Ambassador, Lucy Joyce, says that ''women's empowerment can motivate women by achieving more of the potential by promoting their participation in all areas of work, to build stronger economies, to improve their quality of life, and, through gender equality, give equal opportunities''

To promote this message, the UK in Moldova - British Embassy Chisinauis challenging the Deutsche Botschaft Chişinău to post a picture and write a message for a better and more balanced community!

Better the balance, better the world!" This is the message on Facebook page of British Embassy in Chisinau.

The German Embassy was challenged to promote for a better community.

"On behalf of the entire Embassy team - women and men - Ambassador Angela Ganninger gladly accepts the challenge by our British colleagues UK in Moldova - British Embassy Chisinau. We are happy to join the #BalanceForBetter campaign with our friends! As you might know, Germany will preside over the UN Security Council in April 2019. One of the main topics we want to address will be #Women, #Peace and #Security with a special focus on women in United Nations peacekeeping missions and on the prevention of and fight against sexual abuse in conflicts. We cannot afford to neglect the potential that women can bring to our joint effort to establish sustainable peace, security, and stability! #resolution1325

We now challenge our dear colleagues at the European Union in the Republic of Moldova to continue this important campaign."

The European Union in the Republic of Moldova also participated in the campaign with inspiring message.

"Celebrating the International Women's Day, we join the #BalanceForBetter initiative and challenge colleagues at the Ambasciata d'Italia a Chisinau to continue with an inspiring message!

We warmly congratulate all the women from the Republic of Moldova and invite everyone to follow some beautiful stories at #InspiredByHer!

Every person can take concrete actions to build a more gender-balanced world is the message of the Italian Embassy in Chisinau.

The Italian Embassy in Chisinau gladly accepted theEuropean Union in the Republic of Moldova's challenge to join the #BalanceforBetter Campaign to mark International Women's Day .
“This is a challenge facing all of us”, says Ambassador Valeria Biagiotti. “Every person can make a difference to help building a more gender-balanced world, taking concrete actions within her or his sphere of influence”.
We are now passing on the challenge to theEmbassy of Sweden in Chisinau .

Better the balance, better the world!