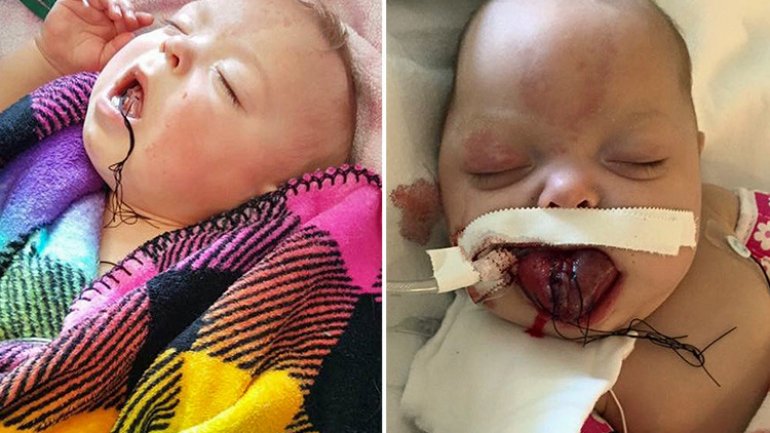 A baby born with an adult-sized tongue can finally smile after life-saving surgery, to stop her choking to death, theSun informs.

Paisley Morrison-Johnson, from South Dakota, had such a large tongue that doctors feared it would block her airway.

The tot was born with Beckwith Wiedemann Syndrome (BWS) – an overgrowth disorder that affects one in every 11,000 births worldwide.

The rare condition caused the little girl’s tongue to grow more than twice the size of her mouth – known as macroglossia – and it even shocked doctors, who said it was one of the largest tongues they had ever seen.

As a result, until she was six months old, Paisley had to be fed via by a gastronomy-tube because she struggled to eat and wasn’t receiving the vital nutrients needed to keep her alive.

Meanwhile, for the first week of her life she was unable to breathe by herself – relying on a ventilator.

Worried parents Madison Kienow, 21, and Shannon Morrison-Johnson, 23, hoped their daughter’s mouth would grow to accommodate her overgrown tongue – but it never did.

Even after surgery to reduce its size, Paisley’s tongue continued to grow back and still hung out of her mouth.

But six months ago, Paisley had her second tongue reduction and has smiled for the first time after having a total of more than six inches of muscle removed.