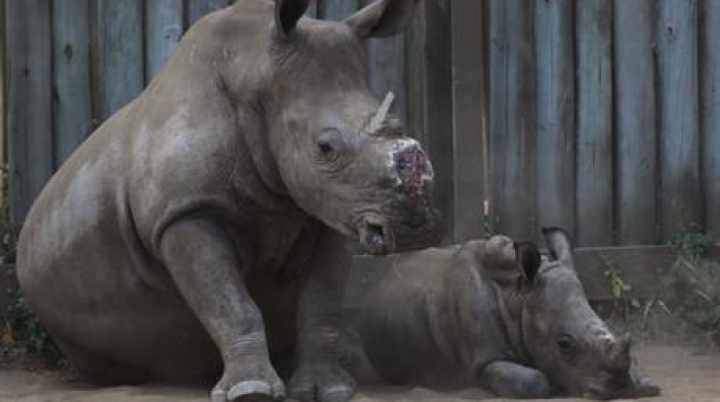 Eager to stop wildlife poaching, some in Africa are taking the drastic step of de-horning rhinos before the illegal hunters do, taking a whining chainsaw to the hulking animals' most distinctive feature.

Earlier this week at the Gwahumbe Game Reserve, an 8-year-old white rhino named Vuyo was an unwilling participant. Shot in a hind leg with a tranquilizer dart, he ran off until the drug took effect. He was then blindfolded.

"So initially, we use a chainsaw to cut the horn off," said wildlife veterinarian Ryan Van Deventer. Experts say dehorning is quick and painless, similar to trimming a horse's hoof.

After slicing off the horn, he ground down the stump to make it smooth and to get rid of as much of the material as possible. An injection woke up the rhino a few minutes later.

"One has to try and minimize the appeal, the risk versus reward to the poachers," Van Deventer said.

About 20,000 southern white rhinos remain in the world, and most are in South Africa.

White rhinos are listed as a vulnerable species by the Convention on International Trade in Endangered Species, or CITES, and their plight will be discussed at the CITES meeting that begins this weekend in Johannesburg.

An international ban on rhino horn has been in place since 1977. But poaching continues, and an increasing number of the rhinos survive the attacks and need treatment for gunshot wounds or deep cuts from axes or machetes.

Record numbers of rhinos have been killed in South Africa in recent years to meet demand for their horns in parts of Asia, particularly Vietnam. Consumers believe rhino horn, which is ground into powder, has medicinal benefits, but there is no scientific evidence to support that.

Poachers killed 1,175 rhinos in South Africa in 2015, according to the government.