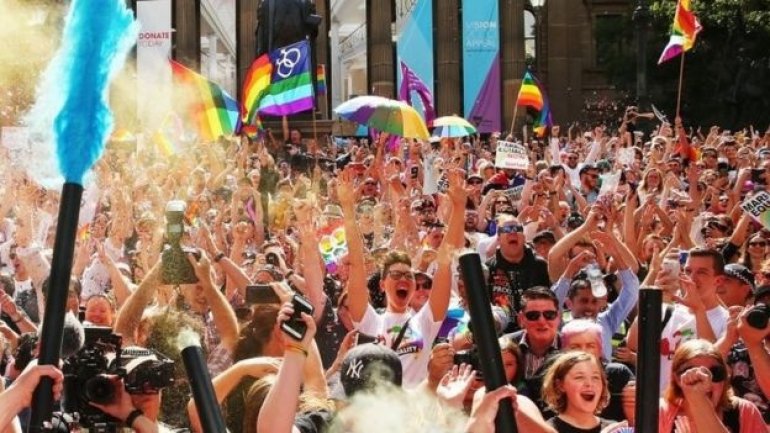 Australians have overwhelmingly voted in favor of legalizing same-sex marriage in a historic poll.

Jubilant supporters have been celebrating in public spaces, waving rainbow flags and singing and dancing.

A bill to change the law was introduced into the Senate late on Wednesday. It will now be debated for amendments.

Prime Minister Malcolm Turnbull said his government would aim to pass legislation in parliament by Christmas.

"Australians have spoken in their millions and they have voted overwhelmingly yes for marriage equality," Mr Turnbull said after the result was announced.

"They voted yes for fairness, yes for commitment, yes for love."

The survey was voluntary, unlike Australia's compulsory elections.

More than 12.7 million people - about 79.5% of eligible voters - took part in the eight-week poll, which asked one question: "Should the marriage law be changed to allow same-sex couples to marry?"

The Yes campaign argued that it was a debate about equality. The No campaign put the focus on the definition of family, raising concerns about how issues like gender will be taught in schools.

Australia's chief statistician David Kalisch said about 7.8 million people voted in support of same-sex marriage, with approximately 4.9 million against it.

He said participation was higher than 70% in 146 of Australia's 150 electorates. All but 17 electorates supported changing the law.

"It shows how important this issue is to many Australians."

During the campaign, each side has accused the other of bullying and misleading discussion, while the debate was even linked to violent incidents.