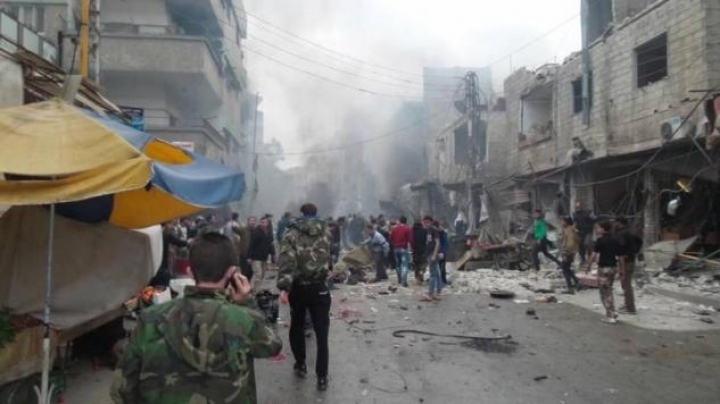 At least eight people were killed and more than a dozen injured Saturday in suicide bomb attacks in a predominantly Shiite suburb of Damascus, the Syrian capital, says USA Today.

Police told SANA that the first blast, at the entrance to the town, came from a suicide attacker wearing an explosive belt. The second blast was from a booby-trapped car in the town, it said.

The Islamic State extremist group claimed responsibility for the bombings through its Aamaq news agency, which said there were three attacks, two by suicide bombers and one by a car bomb.

The Damascus suburb is home to the heavily guarded Sayyida Zeinab shrine, one of the holiest in Shiite Islam. The shrine to Sayyida Zeinab, the daughter of the first Shiite imam, Ali, and granddaughter of the Islamic prophet Mohammed, receives thousands of Shiite pilgrims each year.

Video of the blast site broadcast on Syrian state TV showed several vehicles and shops on fire and at least two heavily damaged buildings. Blood stains could be seen on the debris-covered road.

SANA quoted Prime Minister Wael al-Halqi as blaming Turkey, Saudi Arabia and Qatar, for being behind the “brutal massacres.” The three countries are main supporters of the Syrian opposition trying to remove President Bashar Assad from power.

Sayyida Zeinab has been a frequent target of suicide and car bombings in Syria’s civil war, now in its sixth year. Some of them have been claimed by the Islamic State group, the Associated Press reported.

On April 25, eight people died when a suicide bomber detonated his explosive-packed vehicle at a military checkpoint in the suburb.

In February, a series of blasts ripped through Sayyida Zeinab, killing at least 83 people and wounding more than 170.