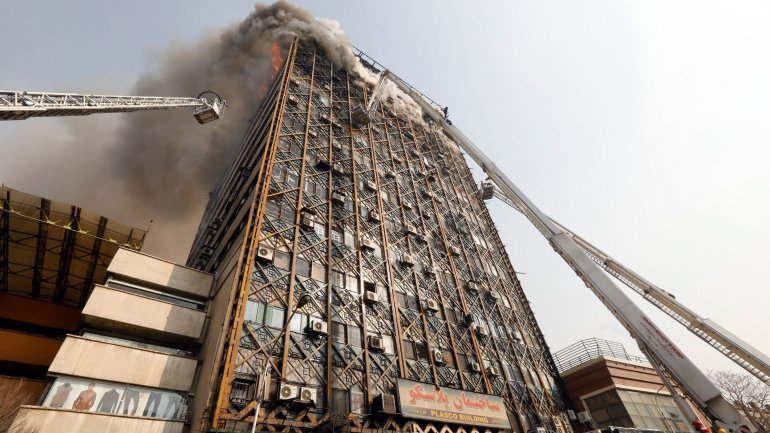 A high-rise building in Tehran engulfed by a fire collapsed on Thursday, killing at least 75 firefighters and injuring many more, state media reported.

Among the dead are 45 firefighters after disaster struck the Plasco building, an iconic structure in central Tehran just north of the capital’s sprawling bazaar, according to metro.co.uk.

Iran’s state-run Press TV announced the firefighters’ deaths, without giving a source for the information.

Firefighters battled the blaze for several hours before the collapse. Police tried to keep out shopkeepers and others wanting to rush back in to collect their valuables.

The building came down in a matter of seconds, shown live on state television, which had begun an interview with a journalist at the scene.

A side of the building came down first, tumbling perilously close to a firefighter perched on a ladder and spraying water on the blaze.

A thick plume of brown smoke rose over the site after the collapse. Onlookers wailed in grief.

Jalal Maleki, a fire department spokesman, earlier told Iranian state television that 10 firehouses responded to the blaze, which was first reported around 8 a.m.

The Iranian military sent units to help with the disaster, state television reported.