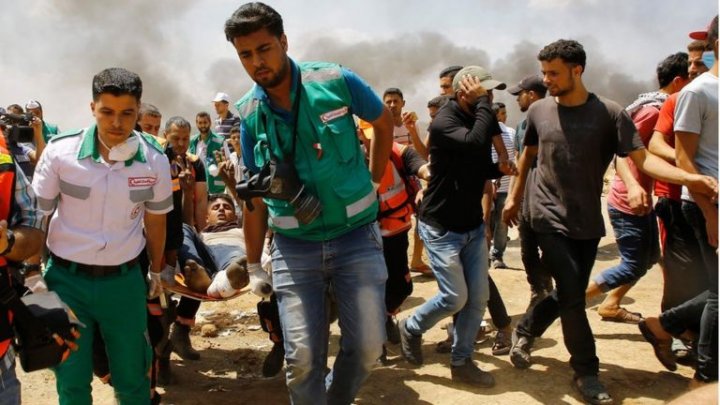 At least 37 Palestinians have been killed and 1,300 wounded by Israeli troops in clashes on the Gaza border, Palestinian officials say.

The violence comes before the opening of the US embassy in Jerusalem, which has infuriated Palestinians, writes BBC.

They see it as clear US backing for Israeli rule over the whole city, whose eastern part Palestinians lay claim to.

Top US officials, including President Donald Trump's daughter and her husband, will attend the event.

Gaza's Islamist rulers, Hamas, have led mass protests in a "Great March of Return" for the past six weeks. Israel says demonstrators are trying to breach the border fence.

Children were among those killed on Monday, the Hamas-run health ministry says.

Israel's army said 35,000 Palestinians were taking part in "violent riots" along the security fence and that its troops were operating "in accordance with standard procedures".

Palestinians have held weekly protests there in the run-up to their annual commemoration of what they call the Nakba or Catastrophe, when hundreds of thousands of their people fled their homes or were displaced following the foundation of the Israeli state on 14 May, 1948.

Scores of Palestinians have been killed since the protests began. Thousands more have been wounded.

Hamas, which is in a state of conflict with Israel, had said it would step up protests in the lead-up to Tuesday, the official Nakba commemoration.

It says it wants to draw attention to what Palestinians insist is their right to return to ancestral homes in what became Israel.

"Today is the big day when we will cross the fence and tell Israel and the world we will not accept being occupied forever," a science teacher in Gaza, Ali, told Reuters news agency.

Israel says the protests are aimed at breaching the border, which it guards heavily, and attacking Israeli communities nearby.

The Israeli military said it had killed three people trying to plant explosives near the security fence in Rafah.

Israeli sovereignty over Jerusalem is not recognised internationally and, according to the 1993 Israel-Palestinian peace accords, the final status of Jerusalem is meant to be discussed in the latter stages of peace talks.

Israel has occupied East Jerusalem since the 1967 Middle East war. It effectively annexed the sector, though this was not recognised by any countries until Mr Trump's declaration in December 2017.