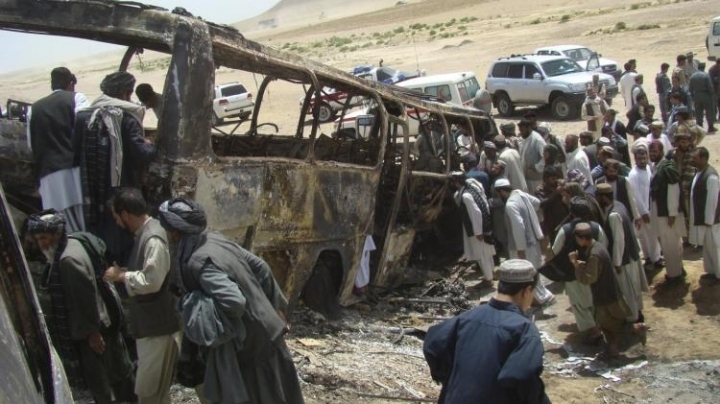 The bus was travelling from Kandahar to Kabul when the accident took place in the Jildak area of Zabul province.

Many of the dead, including women and children, were charred beyond recognition in the inferno. At least 25 people were also injured.

Afghanistan has a bad traffic accident record, with many poorly maintained roads and vehicles.

The injured were taken to Zabul's capital, Qalat, and to Kandahar province. Some are in critical condition.

Gul Islam Seyal, spokesman for the provincial governor in Zabul, accused the drivers of both vehicles of recklessness.

The Kabul-Kandahar road is prone to militant activity and some drivers increase speed to avoid involvement.

In May, 73 people died when two buses and a fuel tanker collided on a highway in Ghazni province.

At least 30 people died in a similar accident in Kandahar province in April 2013.