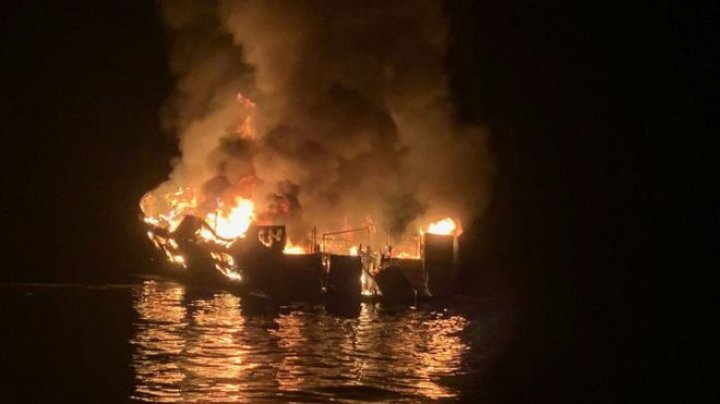 At least 33 people are unaccounted for after a boat was destroyed by fire off the coast of California, writes BBC.

Five of the 38 people on board were rescued, coastguards said. There are reports of fatalities but no official death toll so far.

The fire broke out on board the boat near Santa Cruz island in the middle of the night.

The boat is now submerged as a search and rescue operation continues in foggy conditions.

The vessel appears to be a diving boat and reports say some passengers may have been trapped below deck.

One of those rescued has minor injuries.

Those who were rescued may have been sleeping in the main cabin of the boat rather than below deck.

"It's a large boat, and we know we have numerous fatalities. I don't have an exact number," Bill Nash a spokesperson for Ventura County told CNN.

Used for chartered scuba diving trips in the Channel Islands, the boat is called Conception.

The fire broke out in the early hours of Monday, at about 03:30 local time (10:30 GMT), when the boat was located on the north side of Santa Cruz island, in the Channel Islands National Park.