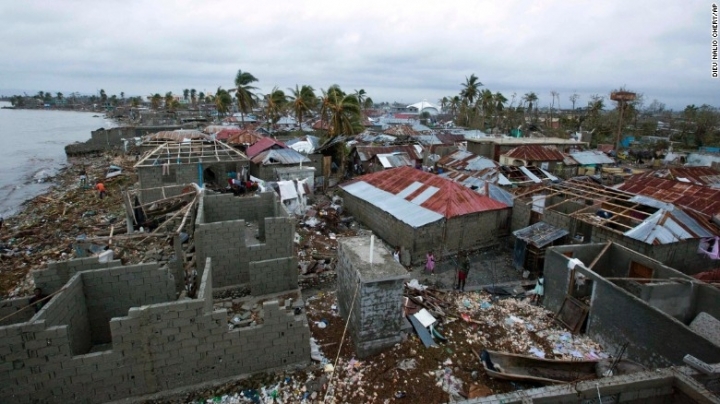 Hurricane Matthew pounded the Bahamas on Thursday on its way to the United States, after leaving behind a humanitarian crisis in Haiti, reports CNN.

At least 269 people have been killed so far in Haiti, the Dominican Republic and St. Vincent and the Grenadines, officials said, with the death toll expected to rise.

Haiti, still recovering from the catastrophic 2010 earthquake which killed hundreds of thousands, was hit hardest with more than 264 people reported dead as of Thursday evening, local time.

As the death toll rises and crucial infrastructure crumbles, thousands have been displaced.

Mourad Wahba, the UN secretary-general's deputy special representative for Haiti, described Matthew as the "largest humanitarian event" since the earthquake.

Four people died in the Dominican Republic, the country's government said. Authorities there did not provide details about how they died.

In St. Vincent and the Grenadines, a teenage boy died in a landslide as he was cleaning a drain behind his house, the National Emergency Management Office said. He died Wednesday after storms from Matthew passed.

Hurricane Matthew made landfall in Haiti on Tuesday but its devastating impact is only now coming to light.

At least 1,580 homes have been flooded in the country, and about 3,215 families have been affected by the severe storm, the country's Civil Protection Agency said.

More than 300,000 people are in shelters across the country, the United Nations said.

Southern Haiti was hit especially hard, where winds of 200 kph destroyed homes, flooded villages and cut off the island from the rest of the country.

In the wake of the storm, the Electoral Commission postponed the country's presidential election, which had been scheduled for Sunday. A new date has not been set.

The powerful hurricane passed over the Bahamas capital, Nassau, on Thursday afternoon, with casualties and damage mostly unknown.

Officials said the hurricane caused flooding in southern and eastern coastal communities and structural damage to a number of resorts in Nassau.

No fatalities were reported as of Thursday evening, local time, as the seafront area of the town had been evacuated ahead of Matthew's arrival.

The United Nations has offered support to Cuba in the aftermath of Hurricane Matthew, in coordination with the Cuban authorities, state media reported on Thursday.