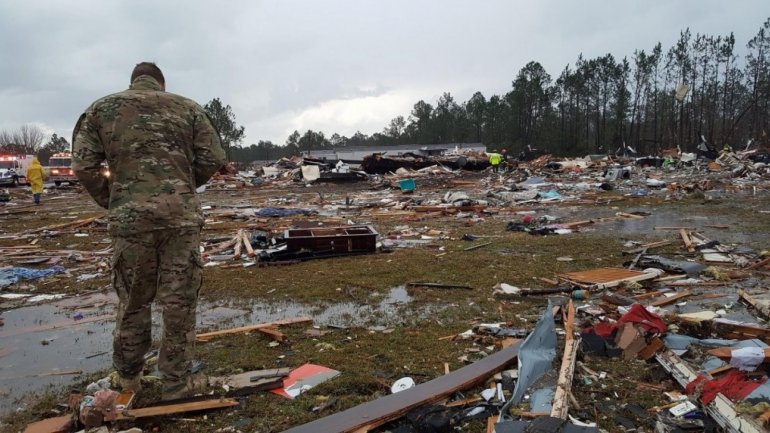 Tornadoes in an unusually brutal winter storm system ripped through the southeast Sunday, killing at least 14 people, flattening much of a mobile-home park in this southern Georgia town and prompting the governor to declare a state of emergency in at least seven counties near the Florida border, according WashingtonPost.

The storms were the latest in a series of violent weather in the region that also killed four people in Hattiesburg, Miss., on Saturday. In Georgia, seven people were killed in Cook County, with two more deaths each in neighboring Brooks and Berrien counties, and three in Dougherty County, according to the Georgia Emergency Management and Homeland Security Agency.

The weather Sunday was particularly devastating in Adel, a rural town of about 5,300 in Cook County where residents in the Sunshine Acres mobile-home park woke about 3 a.m. to a tornado warning. Alan Miley, 26, said he used the bathroom and was walking through the kitchen when he heard a deafening roar and screamed. His cousin, Devocheo Williams, 29, jumped out of bed as the front door blew open, wind and debris swept into the home and windows shattered.

“He shot out of the room, and as soon as he started out, the roof caves in,” Miley said, recalling how he low-crawled to Williams in the bathroom to take cover. “When it let up, I went outside and it was complete chaos. People were screaming and crying for help.”

William Bush, 72, a co-owner of Sunshine Acres, said seven people were killed there and that more than 20 mobile homes were ripped off their foundations and “totally blown away.” He got a call about 3:30 a.m. from employees who live there informing him of the damage.

Bush said area churches sent convoys of buses beginning about 5 a.m. to transport people to shelters. At sunrise, he got a first look at the devastation.

“It was total chaos, devastation everywhere you looked,” he said. “We’ve always said that the most devastating thing that could happen there would be a tornado, and that’s what happened today."