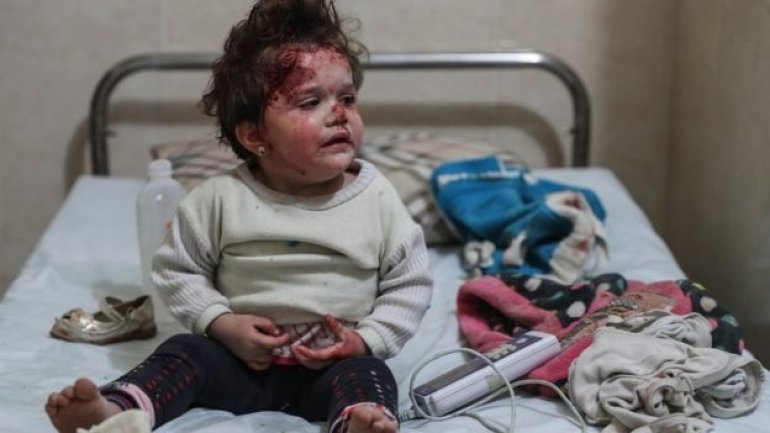 At least 10 hospitals in rebel-held areas of Syria have suffered direct air or artillery attacks over the past 10 days, aid workers say.

An adviser to a coalition of medical charities told the BBC that the attacks had been the most intense for a year.

A senior UN official also told the BBC that health facilities in Syria had been hit "yet again".

Meanwhile, 17 civilians died in air raids in Eastern Ghouta, near Damascus, on Saturday, a monitor said.

The most deadly raid was in Hammuriyeh where 12 people, including two children, died, the UK-based Syrian Observatory for Human Rights said.

Last week, at least 25 civilians were reported killed in air strikes on two towns in rebel-held Eastern Ghouta. About 400,000 people there have been under siege by Russian-backed Syrian government forces since 2013.

Five people died in the worst attack, on Wednesday, according to the Syrian American Medical Society (Sams), and the hospital was temporarily put out of service.

Hamish de Bretton-Gordon, who advises the Union of Medical Care and Relief Organizations (UOSSM), said other attacks in recent days had targeted hospitals predominantly in Eastern Ghouta, on the outskirts of the capital.

"This has been at a level, again, we haven't seen," he said.

The UN's Humanitarian Co-ordinator for Syria, Jan Egeland, also told the BBC that several of the remaining health facilities in the Eastern Ghouta had been hit "yet again".

Other attacks on medical facilities documented by UOSSM include:

The Syrian government recently allowed Red Cross teams to evacuate 29 critically-ill patients from the Eastern Ghouta as part of a deal that saw rebels release the same number of prisoners.

However, hundreds more patients are in urgent need of evacuation from the enclave.