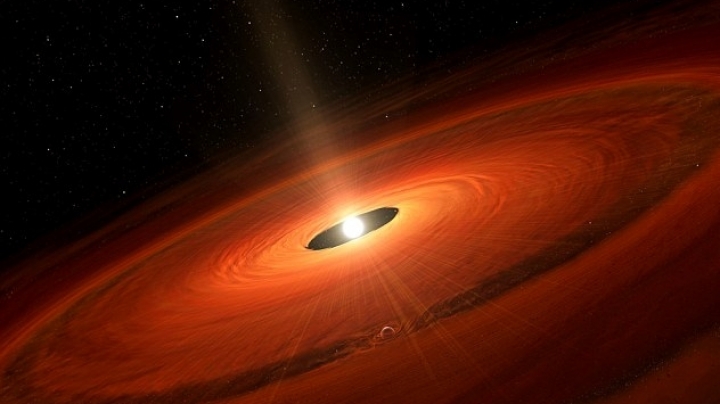 Astronomers have found signs of a growing planet around a star 176 light-years away, reports Daily Mail.

The planet is thought to be an icy giant, similar to Uranus and Neptune.

While a number of new planets have been found in the past two decades, it is still unclear how the icy giant planets form.

The scientists hope that the finding could be another step towards understanding the origins of various types of planet.

Astronomers from Ibaraki University in Japan have observed the growing planet around TW Hydrae – a nearby young star.

They used the Atacama Large Millimetre Array (ALMA) – the world's most powerful observatory for viewing the universe – and say that based on the distance from the central star, the baby planet is thought to be an icy giant.

The TW Hydrae star is estimated to be 10 million years old, and is one of the closest young stars to Earth.

Its proximity and direction gives us a face-on-view from Earth, making TW Hydrae one of the most favourable targets for investigating planet formation.

Previous studies have shown that TW Hydrae is surrounded by a disk of tiny dust particles, which is the site of planet formation.

Building on that knowledge, the Japanese researchers observed the disk around the star with ALMA in two radio frequencies, allowing them to estimate the size of dust grains.

They suggest that the gap in the disk is created by a massive planet, and that gravitational interaction and friction push the larger particles out, while smaller particles fill the gap.

Based on the width of the gap, the researches calculated the mass of the planet, and suggest it is slightly bigger than Neptune.

Takashi Tsukagoshi, who led the study, said: 'Combined with the orbit size and the brightness of TW Hydrae, the planet would be an icy giant planet like Neptune.'

The researchers now hope to plan further observations to better understand how the planet is forming.