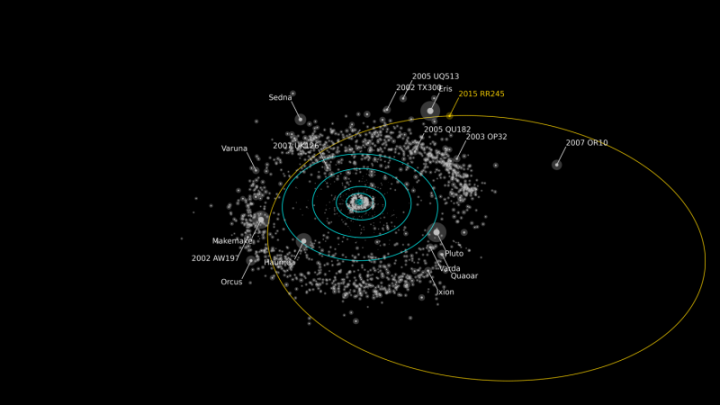 An international team of astronomers have discovered a new dwarf planet orbiting in the disk of small icy worlds beyond Neptune. The new object is roughly 700 kilometers in size and has one of the largest orbits for a dwarf planet. Designated 2015 RR245 by the International Astronomical Union's Minor Planet Center, it was found using the Canada-France-Hawaii Telescope on Maunakea, Hawaii, as part of the ongoing Outer solar system Origins Survey (OSSOS).

"The icy worlds beyond Neptune trace how the giant planets formed and then moved out from the sun. They let us piece together the history of our solar system. But almost all of these icy worlds are painfully small and faint: It's really exciting to find one that's large and bright enough that we can study it in detail," said Dr Michele Bannister of the University of Victoria in British Columbia, who is a postdoctoral fellow with the survey.

National Research Council of Canada's Dr JJ Kavelaars first sighted RR245 in February 2016 in the OSSOS images from September 2015."There it was on the screen— this dot of light moving so slowly that it had to be at least twice as far as Neptune from the sun." said Bannister.

The team became even more excited when they realized that the object's orbit takes it more than 120 times further from the sun than Earth. The size of RR245 is not yet exactly known, as its surface properties need further measurement. "It's either small and shiny, or large and dull," said Bannister.

You can read more at Phys.org