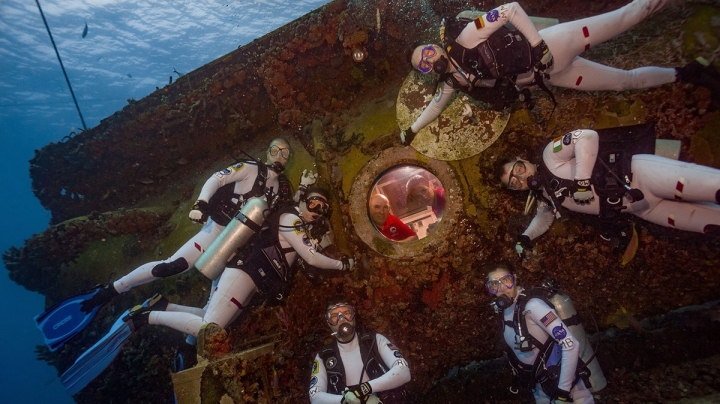 On 21 July, a crew of six astronauts splashed down in scuba gear into the Aquarius Reef Base, an underwater research station 19 metres below the waves off the coast of Florida. The team’s 16 day mission, NASA Extreme Environment Mission Operations (NEEMO), will test gadgets and skills for a future trip to Mars.

It’s the 21st mission of its kind since NEEMO began in 2001. This time, communications between the crew and ground control imitate the delay between Mars and Earth – about 15 minutes in each direction. The aquanauts wear an experimental headset called mobiPV that streams video back to base and lets them talk hands-free. The close quarters of the Aquarius station mimic the conditions of a space station or spacecraft.

High winds delayed the splashdown for three days. The crew started on experiments straight away – on their first full day under, they tried out a miniature DNA sequencing device, which NASA hopes to use on the International Space Station next. Other medical experiments involve technology that could regenerate chromosome telomeres – a symptom of aging – and telemedicine for astronauts far from home.

The aquanauts will also swim out of the Aquarius base to simulate spacewalks and pilot underwater vehicles. Their first challenge: building a coral nursery to practice their low-gravity construction skills.

While the main goal is to get ready for Mars, NEEMO 21 could help with other extraterrestrial trips, too. “What we learn here is also fully applicable to a manned moon mission,” said crew member Hervé Stevenin of the European Space Agency in a press release.